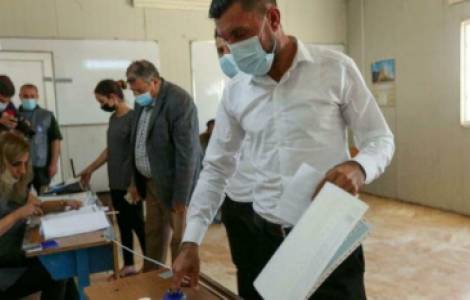 Baghdad (Agenzia Fides) - A few days after the Iraqi parliamentary elections, which took place on Sunday, October 10, the foreseeable post-electoral controversies over the distribution of the 5 parliamentary seats reserved by the electoral system for Christian candidates returns. The most explicit objections to the results relating to the quota of seats guaranteed to politicians belonging to the local Christian communities, were expressed by former Christian Mp Yussef Juseph Sliwa, who went so far as to state in an interview broadcast by the Kurdish network Rudaw that the five new MPs who won the seats in this quota do not really represent Iraqi Christians, given that 90% of the votes in their favor did not come from Christian voters, according to him. The accusation, which also emerged on the occasion of the Iraqi political elections of 2018, calls into question major political groups, of Shiite and Kurdish origin, who allegedly diverted part of their votes to candidates running for Christian seats, in order to place MPs there, fully aligned with their political strategies. In his interview, Sliwa reiterated that politicians belonging to local Christian communities - Syrians, Chaldeans and Assyrians - should not get involved in conflicts between the Shiite and Shiite parties and Kurdish groups against other Kurdish political groups.
Evan Faeq Yakoub Jabro, former minister for Refugees and Migration in the outgoing government led by Mustafa al Kadhimi, who was elected with nearly 11,000 preferences to the new parliament from the ranks of the "Babylon Movement", after competing to occupy the seat reserved for Christian candidates in the city of Baghdad, was quick to respond to Sliwa's accusations. In an interview published by the Rudaw media network, the former minister defended the transparency of the electoral process, stressing that, in the distribution of seats reserved for Christians, there was an eloquent affirmation of women candidates (two out of five), sign that "our society has started to take steps towards a certain intellectual opening".
Evan Jabro also dismissed the accusations of electoral manipulation expressed by Sliwa and Christian politicians as an understandable reaction of political acronyms that had been defeated by the electoral confrontation. The "Babylonian Movement", as reported by Fides (see fides, 12/10/2021), obtained 4 of the 5 seats reserved for Christian candidates by the national electoral system. The fifth seat, in the district of Erbil, went to independent candidate Farouk Hanna Atto.
The Babylon Movement was born as the political projection of the so-called "Babylon Brigades", an armed militia formed in the context of military operations against the jihadists of the Islamic State (Daesh) that led to the reconquest of areas of northern Iraq that had fallen into the hands of jihadists in 2014. Led by Ryan al Kildani (Ryan "the Chaldean"), the "Babylonian Brigades" had always claimed to be a Christian militia, although it connection to pro-Iranian Shiite militias such as the Popular Protection Units (Hashd al Shaabi) was documented. The political acronym of the "Babylon Movement" is also considered close to the "Badr Organization", a political movement that, in the elections, merged with the Fatah Alliance, a cartel that grouped the acronyms and pro-Iranian Shiite organizations, who were beaten in the October 8 elections.
The results of the Iraqi elections, in addition to the defeat of the Fatah bloc, also registered the growth of the Sadrist Party, led by the Shiite leader Muqtada al Sadr, which controlled 58 seats in the previous parliament and which will sit as the first force in the new parliamentary assembly, having won 73 of the 329 seats in Parliament. The Fatah coalition won just 15 seats, compared to 48 controlled by the same coalition parties in the previous parliament, and did not recognize the results of the vote, calling on its supporters to take to the streets. In Baghdad, protesters gathered near the "Green Zone", an area where government offices and embassies are concentrated. Similar protests have also taken place in recent days in Basra, Kerbala and Kirkuk.
Only 41% of those eligible to vote went to the polls, the lowest figure in six general elections held in Iraq since 2003, after the end of Saddam Hussein's regime. The election, scheduled for 2022, was brought forward after popular protests in autumn 2019 showed widespread discontent with all Iraqi political leaders, accused of corruption and mismanagement. Iraqi election results recorded an important affirmation of the presence of women in Parliament. 97 women parliamentarians were elected, well above the 25% quota allocated by law (83 out of a total of 329 seats). (GV) (Agenzia Fides, 21/10/2021)

AMERICA/VENEZUELA - Bishops for the elections: "We must not remain in quarrel and conflict"