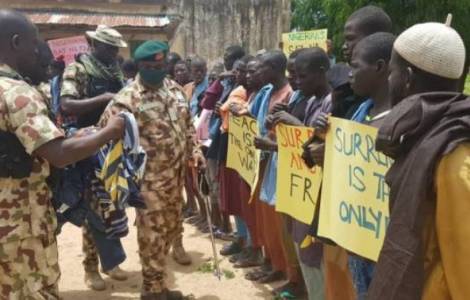 Maiduguri (Agenzia Fides) - It is called "sulhu" and in Arabic means "reconciliation". This is the secret program by which the Nigerian central government intends to convince the leaders of Boko Haram, the famous jihadist military formation which has been dramatically active in the country and in some neighboring countries for years, to abandon the armed struggle and to withdraw to embark on the path of reintegration into society at the expense of the government. Whoever accepts is placed in a reintegration program which, after an initial screening on the sincerity of the militiaman, provides training courses on legality, psycho-social therapy and, finally, a reintegration program which, although secret, generates a great debate. Interviewed by Agenzia Fides, Father Donatus Tizhe, priest administrator of the diocese of Maiduguri, in the state of Borno and parish priest of St. Hilary Polo, commented: "Suhlu is a means of bringing people to peace, to reconciliation as the term itself says. We do not know much about it because it is a secret program, but we are convinced that after so many failures, it will work. In recent years many attempts at dialogue have failed, alternative methods have not worked and people continue to suffer for too long. I believe that with prayers and cooperation, including with young people from the Civilian Joint Task Force (JTF, a self-formed group of militants from the city of Maiduguri, which fights for the expulsion of jihadists from the region, ed), things can improve". Over the past two months, many defections have taken place among Boko Haram leaders and various factions have broken away from the group, but the civilian population is divided: there are those who, weary of the war, welcome the program, and those who do not accept to live together, perhaps in the same village where the massacres took place, with the executioners.
Father Donatus Tizhe emphasizes: "The first objective must be to end this war and perhaps this method may prove to be the most effective. Over the years, the government has attempted amnesty for the guerrillas, who aimed to guarantee immunity to anyone who leaves the armed struggle and a path of integration into social life. This program, on the other hand, points directly to the leaders of terrorist groups, contacts them and makes them understand the advantages of leaving the armed struggle, then inserts them into rehabilitation programs. In doing so, therefore, he is addressing the leaders, who have far greater persuasive power than ordinary soldiers. In fact, in the past two months alone, more than 2,000 leaders have fled the forest and are convincing others to do so. In this way, Boko Haram is eliminated from within". Once they have surrendered, a gradual process of reintegration begins, explains the priest: "They are taken to a center near the port of our city and stay there for a long time, in a process of screening their intentions. Then they are transferred to the villages or towns where they are supposed to start a new life. I can say that in the last few months we have seen a decrease in attacks. Unfortunately, however, the terrorist factions are fighting each other, trying to take the lead in the movement. This could in any case be a turning point and we trust in God that we will succeed in freeing ourselves". (LA) (Agenzia Fides, 15/10/2021)