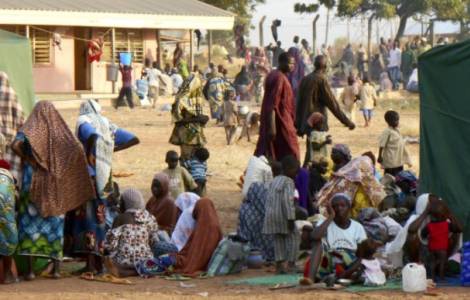 Yola (Agenzia Fides) - "Since 2014 we have welcomed in our diocese thousands of people fleeing from neighboring areas occupied or destroyed by Boko Haram, we have welcomed in the spaces of our Cathedral of Saint Teresa, in parishes, in schools, up to 3,000 people, we have opened the doors of our churches, our premises and houses, to give a refuge to these brothers of ours. Some of them still cannot return to their villages due to the presence of terrorists in the area; that is why we have decided to build houses for them and let them live here with us". These are the heartfelt words sent to Agenzia Fides by Msgr. Stephen Dami Mamza, Bishop of Yola, capital and largest city of Adamawa State, extreme eastern Nigeria, one of the areas most affected by the ferocity of Boko Haram. In order to come to the aid of groups of families staying in his diocese, a specific initiative has been taken.
The bishop explains to Agenzia Fides: "From the north of our State, starting from 2014, many people have fled, stripped of everything and terrified, who have come to my diocese. Since then we have chosen to do everything possible to welcome them with dignity and have opened many of our buildings to organize camps. For a few thousand of them, since the situation calmed down and the army regained control of the area, it has been possible to return home. But for some 850 people, due to the enormous risks they still run in their villages, the possibility of returning is absolutely impractical. For them, tired of living in tents in the camps, with no prospects for the future, we have thought about building real houses".
With the contribution of "Missio" in Germany, the main sponsor of projects for the diocese of Yola, and thanks to a donation from the Governor of the State of Adamawa of 10 acres of land, apartments have been built to house about ninety families.
"It will be a neighborhood where in addition to housing - says the Bishop - there will be a school, a church and a mosque (about 5% of the refugees are Muslims, ed). To be precise, there are 86 houses for 86 families and from mid-April when the works will be completed and the houses delivered, they will become their permanent home. They have been here with us for a long time, they will become our fellow citizens and will thus be able to imagine a future with a minimum of stability. All families have lost at least one member killed by Boko Haram, but many families have had more than one member killed or kidnapped, so they are all traumatized and also tried for not being able to count on a home and facilities for their children. They have different stories united by great pain and a sense of disorientation, we hope this new perspective will help them start over".
The situation at the moment, as Mgr. Mamza explains, is relatively peaceful even though the forests around the villages in a part of the area where the refugees come from remain very dangerous areas. Meanwhile, the initiatives of religious leaders continue to promote peace and dialogue.
The Bishop concludes: "The Interreligious Council is very active here, in which I was entrusted with the responsibility of all Christian Churches. In our State there are many initiatives for peace and dialogue, and in some cases religious leaders go directly to where peace is threatened to promote reconciliation and understanding. The direct line to local communities and mediation are effective tools. I am glad of the climate of dialogue, although the true intentions must always be verified: in the case of Muslims, as in the case of Christians, sometimes there is the feeling that they only want dialogue if it suits their own interests. In any case, we are very determined and we will do everything possible to promote a climate of relaxation". (LA) (Agenzia Fides, 27/3/2021)