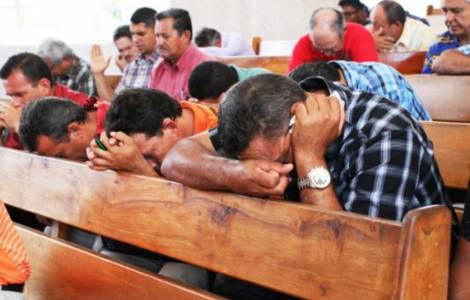 Lucknow (Agenzia Fides) - Nuns and Catholics and faithful were attacked by a group of Hindu extremists in the state of Uttar Pradesh, in northern India. As Agenzia Fides learned, the militants harassed some nuns and about 50 devout Christians in Mau district on October 10. Members of the radical Hindu groups "Bajrang Dal" and "Hindu Yuva Vahini" forcibly led seven Christian faithful to the nearby police station, where they spent the night in custody. Among the seven, there were three women and the evangelist Christian Pastor Abraham Shakil, accused of carrying out alleged "forced religious conversions", reports to Fides Father Anand Mathew, priest and promoter of human rights, noting that "these attacks are based on pretexts to harass and abuse Christians". In another episode, two Ursuline Franciscan nuns were forcibly taken to the police station and detained for six hours. The nuns were at the city bus stop. After the intervention of a senior police officer from Lucknow, the capital of the state of Uttar Pradesh, the nuns were released. The religious are Sisters Gracy Monteiro and Sister Roshni Minj.
They were at the bus stop because Sr. Minj had to travel by bus to visit her sick father in the Indian state of Jharkhand. When Sister Minj simply asked for information regarding the bus timetable, the two were stopped, verbally assaulted and forcibly taken to the police station, where the Christians and the Pastor were detained. "We were shocked when we were taken to the police station claiming that we were part of a Christian community involved in forced religious conversions. It is completely false", Sister Monteiro said.
The complaint presented by Radheshyam Singh, a Hindu man, states that Christians "have not followed the health measures of Covid-19" and accuses them of "being involved in the conversion of others to Christianity through illicit means such as providing work and money". "These accusations and such episodes - notes Patsy David, representative of the NGO ADF International - are part of a plan organized to oppress Christians in Uttar Pradesh".
According to ADF, 374 cases of violence against Christians have been documented in Uttar Pradesh since 2017. Attacks have been on the rise since the Uttar Pradesh government passed the "Anti-conversion Law" in September 2020. In most cases, extremist groups attack Christian halls or homes and disrupt their meetings, damage their property, furnishings, bibles and publications, and are brought to the police. After the attacks by Hindu extremists and arrests, the faithful face a tortuous legal path, with requests to the courts for bail. Consequently, many Christian pastors and faithful are full of fear even when they worship or pray together.
Uttar Pradesh, a predominantly agricultural state home to 230 million people, is the largest state in India. According to the 2011 census, Christians are a small minority, about 350 thousand faithful. (SD-PA) (Agenzia Fides,12/10/2021)