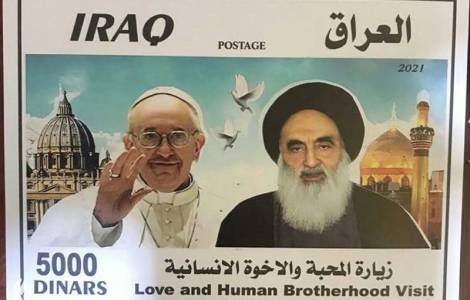 Baghdad (Agenzia Fides) - The General Company for Post and Savings in Iraq, directed by Idris Khaled Abdel Rahman, has issued a special series of stamps dedicated to Pope Francis' visit to Iraq, which took place from March, 3 to 8 2021.
Presenting the series, the spokesman for the Ministry of Communications, Raad Al-Mashhadani, drew attention in particular to the stamps commemorating the meeting of the Bishop of Rome with His Eminence, Sayyid Ali Al-Sistani and the papal visit to the city of Ur, the place where the journey of Patriarch Abraham, Father of all believers began.
The initiative of the General Company for Post and the Iraqi Ministry for Communications, led by Minister Arkan Shehab Ahmed al Shaibani - local media reports - intends to celebrate the papal visit and in particular the meeting between Pope Francis and Ayatollah Al Sistani as a demonstration of peaceful and fraternal coexistence between members of different faiths, both in Iraq and in the rest of the Middle East. Similar philatelic issues were also dedicated to visits to Iraq by other internationally known personalities. The stamps commemorating the papal visit, edited on a graphic level by Iraqi artist Saad Ghazi, are issued with various price cuts, and will be sold at post offices.
In September 2020 (see Fides, 30/9/2020), the Iraqi Postal Service has issued, for the first time, a series of stamps dedicated to celebrating the Country's churches. The series included eight stamps, depicting historic churches of Iraq, located in various regions of the national territory and belonging to communities of different Christian denominations. The multicolored representations of the different churches are the work of Iraqi artist Saad Ghazi. The choice of the National Postal Service to reproduce churches on postage stamps was combined with other gestures of attention reserved by the Iraqi political leadership to indigenous Christian communities, a few months before the papal visit. On 10 August, on meeting the Chaldean Patriarch Louis Raphael Sako and some of his collaborators, Iraqi Prime Minister Mustafa al Kadhimi expressed the hope that Iraqi Christians who emigrated abroad during the jihadist occupation of the north of the Country will soon return to Homeland. "Iraq", said Kadhimi on that occasion, "is the Country of all Iraqis, and Christians are the Country's original children". (GV) (Agenzia Fides, 22/9/2021)