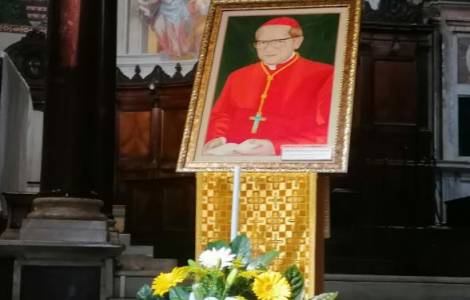 Rome (Agenzia Fides) - Following the example of Francis of Assisi, Cardinal Van Thuan placed the gift of his person and of his own life, recognizing himself as a creature of God, as stones to build the holy edifice of the Church. This is what was said by Cardinal Peter Turkson, Prefect of the Vatican Dicastery for Promoting Human Integral Development in a solemn Eucharist held on September 17 in the Roman Basilica of Santa Maria in Trastevere, on the occasion of the 19th anniversary of the death of the Vietnamese Cardinal, Venerable François-Xavier Nguyên Van Thuân (1928-2002).
Faithful, nuns, priests and lay people from the Vietnamese community in Rome and the Administrator of the cause of canonization, Luisa Melo were present at the celebration. Among the concelebrants, Father Dinh Anh Nhue Nguyen OFM Conv, Secretary General of the Pontifical Missionary Union and Director of Agenzia Fides, announced his intention to organize next year, on the occasion of the 20th anniversary of the death of Cardinal Van Thuan, a special week of spirituality on the theme "Holiness in the contemporary world", to commemorate and deepen the precious legacy of the Cardinal for the present.
"Today we commemorate his life and his extraordinary experience of faith. We are united in prayer to entrust him to God and pray for his beatification. We are gathered to renew our hope in the God of Providence", Cardinal Turkson explained in the homily. Referring to the first reading of the liturgy (Rom 12: 3-13), Cardinal Turkson recalled that "each of us has received gifts from God, such as faith, prophecy, charity. And Cardinal Van Thuan, following the example of Francis of Assisi, whose name he bore, built the Church with the gifts he received from God. The Cardinal teaches us that the gifts he received are not for his own use: they are for the community. Today he is a guide and a point of reference for the Church in Vietnam".
During the Mass, the faithful present prayed for those who suffer persecution for their faith in Vietnam and other parts of the world and for the mission of the Dicastery for Promoting Human Integral Development, so that its work is always accompanied by the intercession of the Cardinal. Van Thuan.
The Vietnamese faithful and the many who knew him remember his extraordinary Christian experience, marked by the events of imprisonment and persecution, describing him as "a person always full of light, joy, inner peace, a man in whom the virtues of humility, of simplicity and charity shone".
Today the path towards the beatification of the Cardinal, declared Venerable by Pope Francis on May 4, 2017, awaits the miracle for its full fulfillment. The Dicastery for Promoting Human Integral Development, which in the past Cardinal Van Thuan presided, when it was called "Pontifical Council for Justice and Peace", is committed to promoting knowledge of the life and spirituality of the Vietnamese Cardinal, as gift for the universal Church. (PA-AN) (Agenzia Fides, 18/9/2021) 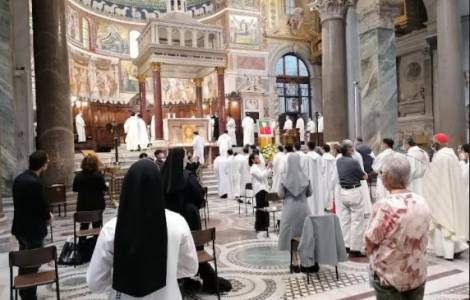 ASIA/BANGLADESH - In the Year dedicated to St. Joseph, the first book on the saint in Bengali

AMERICA/NICARAGUA - The Bishops: "Nicaragua is bleeding" due to repression, emigration, pandemic, hunger