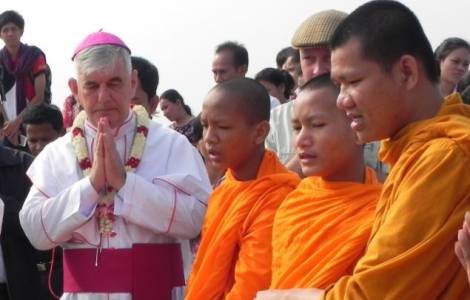 2022-04-30
Reconciliation and justice: towards the conclusion of the Khmer Rouge trial

Battambang (Agenzia Fides) - In Cambodia the "Time of Creation" is a fruitful opportunity to develop dialogue, friendship and deep interreligious relations between Christians and Buddhists. As Fides learned, from September 1st, Catholic priests and Cambodian Buddhist monks began to meet and plant trees together to celebrate the "Day of Prayer for the Environment" and the special season in which, at a universal level, Christians place the emphasis on safeguarding creation. "We all have the responsibility to protect the Common Home in which we live", says Mgr. Enrique Figaredo, Apostolic Prefect of Battambang, inviting everyone to celebrate the "Time of Creation", period from September 1st to October 4th, in line with the Encyclical "Laudato Sì" by Pope Francis, 2015, on the care of the common Home.
In the Apostolic Prefecture of Battambang, in the northwest of Cambodia, about 300 kilometers from the capital Phnom Penh, "we live the joyful experience of collaborating with Buddhist monks for the good of the environment, of society, side by side, united for a better future", said Mgr. Figaredo. For five years, on the occasion of the "Time of Creation", Catholics and Buddhists have taken this initiative to take care of the territory and to give an example to all citizens, of any religious creed. "We need a greater commitment on our part and at the same time it is important to educate young people to carry out this same commitment", notes Mgr. Figaredo. "It is a question of love for life: if we love our life and that of our neighbor, we must protect and take care of the environment as it is a gift we have received from God, it is the work of his hands", he said. "Even though we have different faiths, nationalities, ethnic groups and cultures, we are human beings, all called to work together for unity and solidarity", he said.
In Cambodia in particular, collaboration for the protection of the natural environment and creation "is also a way to promote peace, solidarity and understanding between all of us", notes the Prefect. With this spirit, the Prefecture of Battambang simultaneously celebrates the "Day of Interreligious Dialogue" in September, with accents and initiatives that touch and involve the "Time of Creation". (SD-PA) (Agenzia Fides, 8/9/2021)

AMERICA/ARGENTINA - "Listening and walking together": opening of the Laudato Sì week 2022