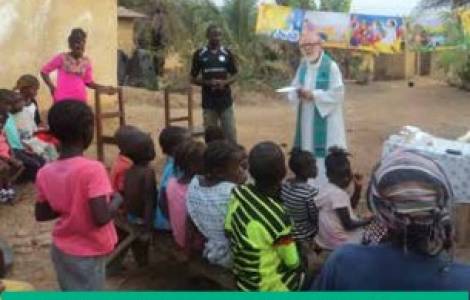 2022-01-10
Election year 2023: On the sidelines of the election campaign, missionaries work in silence

Foya (Agenzia Fides) - "In Africa I would never have been able to carry out my missionary service without the help and support of so many catechists", said Fr. Walter Maccalli in reference to the Motu Proprio “Antiquum ministerium” of May 10, 2021, with which Pope Francis established the ministry of catechists.
The priest, a missionary of the Society for African Missions (SMA), in the note sent to Fides, explained what the catechist does in the African Church. "They are the point of reference for Christians in small communities, since they live in close contact with them and animate Sunday celebrations when the missionary are unable. For example, in Angola, during the long civil war, catechists always remained on the spot, even when priests and nuns had to abandon their missions for security reasons. They gave proof of their faith, despite the danger and persecution", underlines Fr. Maccalli. "They never stopped the work of evangelization, they continued to give Christian formation and assistance to the faithful, even in precarious conditions, in isolated villages in the forest, in the neighborhoods of the displaced people, or in refugee camps beyond the Angolan borders".
As evidence of the irreplaceable role of catechists, the SMA missionary remembers one, Estêvão Tomais, born two years before 1961, the year in which the Angolan liberation war began. "He was destined to die because he was mestizo - he says. In fact, his father was Portuguese. He was saved by his Angolan mother, who fled to the forest. Catechist by vocation and responsible for the communities scattered in the large parish of Nambuangongo, he has become the faithful collaborator of the missionaries. He is still today the formator of new community leaders, to whom he teaches liturgy and how to explain the Bible".
"The Angolan Catholic Church owes a lot to catechists for the incalculable contribution they have made to evangelization over the forty years of the war - said Fr. Walter. The impact of the words of an African catechist on the Christians of their communities is very strong, certainly greater than that of us European missionaries. As a connoisseur of local culture and traditions, his word is a stimulus and encouragement to live the Christian faith in those situations in which the Gospel comes into conflict with certain ancestral practices and mentalities. They know how to synthesize the many good things that exist in the African tradition and the novelty of the announcement of Jesus"
"Here in the mission of Foya, in Liberia, where I am now - concludes Fr. Walter - in our parish we can count on a catechist sent to us by the diocese. Among the various services offered, he prepares adult catechumens for Baptism, exercises an itinerant ministry in the villages, for catechesis and liturgy in the local language, the Kissi, as well as helping to restore peace in families and villages where conflicts have arisen". (WM/AP) (Agenzia Fides, 1/9/2021)