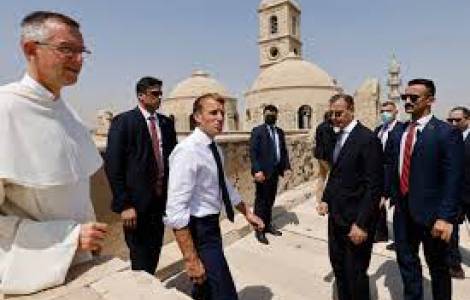 Baghdad (Agenzia Fides) - "The international summit held in Baghdad with the participation of the French President was an important event, a strong sign of support for Iraq and its path to regain stability. But then, other moments of Emmanuel Macron's visit to Iraq, and especially his trip to Mosul, were marked by gestures and words that to many Iraqis appear unsuitable, and risk fueling misunderstandings".
In a conversation with Fides, the Patriarch focuses on the general and particular aspects that lead him to define Macron's visit as a "hasty and poorly prepared visit".
First of all, Cardinal Sako considers the now obsolete cliché of visits by Western leaders who go to crisis areas to be misleading, presenting themselves as potential "resolvers" of conflicts and long-term degraded situations: "We have seen many Western political and military 'missions' in the Middle East, we have seen so many promises of help, and in the end it all remains at the level of empty words, if not worse. Let's think about what happened in Afghanistan. Let us think of the many promises made recently to Lebanon, which continues to struggle in a very serious crisis. The reality is that Western countries cannot do anything, especially now that they are all busy solving their economic problems and concentrating their resources in the fight against the pandemic".
The error of expecting salvation and the solution of problems from the West - points out the Chaldean Patriarch - has had devastating effects even when it specifically concerned the Christian communities of the Middle East. "That of the West that defends Christians in other areas of the world", Patriarch Sako told Fides, "is a legend that has done so much damage. And some moments of Macron's visit to Mosul appeared as yet another revival of that legend". In the martyr-city, President Macron visited the Latin church known as Our Lady of the Hour, traditionally officiated by the Dominican Fathers. "In that circumstance" notes Patriarch Sako "Macron's interlocutors were mainly Europeans, and even the Iraqi bishops present seemed to be guests. There was an atmosphere of cordial familiarity among European compatriots, in contrast to the formal and cold atmosphere created when the French President visited the Great Mosque of Al Nuri. Some Sunni imams criticized Macron's visit while it was still ongoing. What I mean - adds the Chaldean Patriarch - is that our first desire is to see the Christians who fled those lands return and stay in their homes. It is necessary to promote the restoration of a fabric of harmonious coexistence between the different ethnic and faith communities, the same that characterized Mosul in past times. In this regard, Macron’s visit did not help, it was a missed opportunity and even risked fueling mistrust among Muslim fellow citizens. The last thing for the Christians here to do is to put their trust in Western politics. If France opens a consulate in Mosul or builds an airport there, these are not matters that concern the bishops and the things that the bishops must ask the local civil authorities".
On his two-day trip to Iraq, Macron visited Baghdad, Mosul and Erbil. In the Iraqi capital, the French President took part in the regional summit organized by the Iraqi government on Saturday, August 28 which saw the participation of, among others, foreign ministers (but not Heads of State) of Saudi Arabia, Iran and Turkey. "Iraq cannot be the scene of regional clashes!", Iraqi Prime Minister Mustafa al Kadhimi said at the opening of the meeting. (GV) (Agenzia Fides, 31/8/2021)