VATICAN - Pope Francis to the Lebanese: "I greatly desire to visit you" 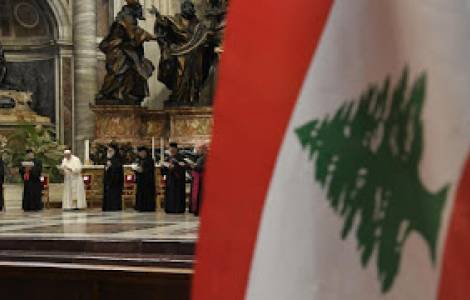 Rome (Agenzia Fides) - Exactly one year after the deadly explosion that devastated the Port of Beirut, killing nearly 200 and injuring thousands, Pope Francis has publicly renewed his commitment to visit Lebanon in the near future. This is what he said at the end of the Wednesday General Audience, which was held this morning, Wednesday, August 4, in the Paul VI Hall in the Vatican. "Dear Lebanese friends", the Pope reiterated "I greatly desire to visit you and I continue to pray for you, so that Lebanon will once more be a message of peace and fraternity for the entire Middle East".
Before reiterating his desire to visit the Land of the Cedars soon, the Pontiff had explicitly referred to the "terrible explosion" which took place a year ago in the port of the Lebanese capital, causing "death and destruction": "my thoughts" said the Pope, "goes to that dear country, in particular to the victims, to their families, to the many injured and those who have lost their homes and their jobs". The Bishop of Rome then recalled the Day of Prayer and Reflection for Lebanon, which he had called for last July 1, and which brought together the Patriarchs and heads of the Churches and ecclesial communities present in Lebanon in the Vatican (see photo). On that occasion - the Pope continued, "we welcomed the aspirations and expectations of the Lebanese people, tired and disappointed, and we called on God as a light of hope to overcome the difficult crisis. Today, added the Successor of Peter, I also launch an appeal to the international community, asking them to help Lebanon to make a path of "resurrection", not only with words, but also with concrete gestures. I hope that, in this sense, the current Conference, promoted by France and the United Nations, will be fruitful".
With today's General Audience, Pope Francis has resumed the cycle of catechesis dedicated to the Apostle's Letter to the Galatians, after the summer break that coincided with the period of convalescence following a surgical intervention for a Symptomatic diverticular stenosis of the colon which the Pontiff underwent on Sunday, July 4. (GV) (Agenzia Fides, 4/8/2021)