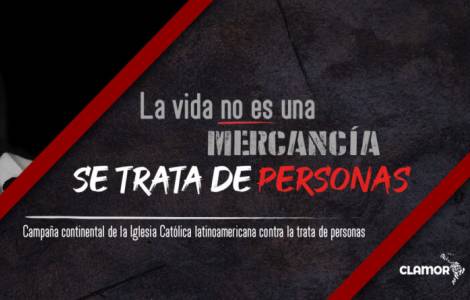 Brasilia (Agenzia Fides) - Today, July 30, the World Day against Human Trafficking is celebrated. Red Clamor, an organization that brings together men and women committed to accompanying, defending, promoting and including displaced persons, migrants and refugees who are in the region of Latin America and the Caribbean, with the patronage of the Latin American Episcopal Council (Celam) and the Latin American Confederation dei Religiosi (Clar) have launched four videos, as part of a continental campaign of the Latin American Catholic Church against Human Trafficking, which were also produced by Cáritas Ecuador. The videos, with the motto "Life is not a commodity on sale, it is about people", are disseminated through social networks, WhatsApp, Telegram groups, Youtube.
"Everyone is invited to spread these materials and to join in giving witness to a Church on a missionary journey, which denounces the culture of waste and indifference, promoting the culture of encounter, weaving networks in favor of life and integral human development", Underlines Elvy Monzant, Executive Secretary of Red Clamor.
Human trafficking is defined as modern slavery: thousands of people around the world are victims of this shameful crime, we are talking about women, men and minors, who are exploited every day in different ways. Through the videos, the Campaign intends to raise awareness on the continent with regards to the reality of the problem posed by the crime of human trafficking for various purposes, such as sexual exploitation, forced recruitment, slave labor, organ trafficking. According to statistics released for the circumstance, 4 million people every year are victims of transnational criminal industries that profit from the lives of human beings, moving more than 32 billion dollars. Of all the victims of trafficking, 80 per cent are women or girls for the purpose of sexual exploitation. Human trafficking for forced recruitment for armed conflict and / or criminal activities constitutes a further serious violation of human rights that has grown in Latin America in recent years. Thousands of people have been affected, especially children, adolescents and young people. Traffickers and their networks take advantage of the lack of protection and the economic, emotional and work needs of the victims, to use them as tools for war, putting them at the risk of their lives, depriving them of their life plans and their decision-making capacity. Human trafficking for organ trafficking is another industry that feeds on the desperation of the patient and the poverty and vulnerability of the victim. People are taken to clandestine places for the extraction of their organs, in unhygienic and unsafe conditions. Organ trafficking is an illegal commercial crime that generates millions of profits around the world. The Episcopal Commission for Migrants and Itinerant People (Cemi) of the Argentine Bishops' Conference hopes that the World Day Against Trafficking "will help us all to remember this crime, and encourage us not to stop praying and fighting together", with the goal that "every slave returns to be a free protagonist of his/her own life and an active part in the construction of the common good".
In the message, sent to Fides, Pope Francis' words on the theme "Economy without trafficking" are stressed. The consequences of the Covid-19 pandemic "have exacerbated and worsened the conditions of labor exploitation", which is why he proposes an economy of caring, which "means an economy of solidarity", which "well administered, gives rise to the construction of a safer and more solid society".
"An economy without trafficking is an economy with market rules that promote justice and not exclusive private interests", continues the text of CEMI, underlining that human trafficking finds fertile ground "in neoliberal capitalism, in its quest to maximize profits without ethical limits, without social limits, without environmental limits". An economy without trafficking is characterized instead by the value "of patient construction, of medium and long-term planning, where the person is at the center". "crisis, like the current one, trafficking proliferates", the text reaffirms, therefore it is necessary "to strengthen an economy that responds to the crisis not in a short-sighted way, but in a solid and lasting way". (SL) (Agenzia Fides, 30/7/2021)