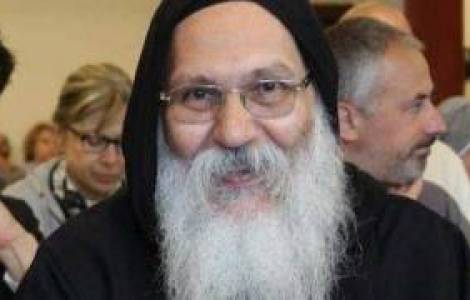 Cairo (Agenzia Fides) - Anba Epiphanios "was a bishop who enlightened all those around him with his presence", and "despite the pain we all feel, we trust in his resurrection and greet him, as our Church teaches us to do when we say goodbye to our beloved brothers and sisters". With these words, Coptic Orthodox Patriarch Tawadros II paid homage to the memory of Bishop Epiphanios, killed three years ago, in the early hours of Sunday, July 29, 2018, in the monastery of St. Macarius, in that monastery, where he was abbot. The Coptic Orthodox Church is preparing to commemorate the Bishop the third anniversary of his death, after the death penalty issued by the Egyptian judicial authorities against Wael Saad Tawadros, former Egyptian Orthodox Coptic monk convicted of the murder of his Abbot.
The execution of the death sentence of former monk Wael represented the latest, tragic development of a story that has deeply traumatized and wounded the entire Coptic Church, starting from its relevant monastic reality. The figure of the murdered bishop is commemorated today, Thursday, July 29, with a divine liturgy celebrated in the monastery of St. Macarius. Sources of the Coptic Church, relaunched by the Copts Today website, have announced the presence of Pope Tawadros at the celebration. "From the life of Bishop Epiphanios", the Primate of the Coptic Orthodox Church underlined, "we can learn a lot". According to Pope Tawadros, in the figure of the bishop assassinated by one of his monks in his monastery, some of the virtues that can by grace characterize monastic life are condensed: an "abundant knowledge", accompanied by an exemplary "simplicity of life" and a "wise meekness", which is often felt in those who follow the way of Jesus in simplicity of heart. "I learned from Epiphanios" the Coptic Orthodox Patriarch recalled "the true meekness that the Lord Jesus commanded us to learn from him, when he told his disciples: 'learn from me, I have a meek and humble heart' ".

In the early hours of Sunday 29 July 2018, the body of Bishop Epiphanios had been found in a pool of blood, inside the Monastery of St. Macarius, along the path that led from his cell to the church, where the Bishop was going to start the day with the morning prayers, before Sunday Mass (see Fides, 30/7/2018). On August 5, 2018, a few days after the crime, A few days after the crime, Wael Saad Tawadros had been expelled from the monastery and stripped of his monastic habit, with a measure approved by the Coptic Orthodox Patriarch Tawadros II. A short time later (see Fides 11/8/2018), Wael Saad Tawadros himself had been identified by the Egyptian judicial bodies to be the author of the murder of Bishop Epiphanios. According to what was then reported by the Egyptian media, the former homicidal monk had already confessed to his crime, revealing that he had killed Anba Epiphanios with an iron rod. The development of the investigation had led to the arrest of Wael Saad and another monk of St. Macarius, Falta'os al-Makary). Both accused as guilty of the premeditated murder of Anba Epiphanios. On February 23, 2019, the Criminal Court of Damanhur had sentenced both defendants to the death penalty in first instance. In the sentence, it was read that the two condemned had no scruples in committing their crime in a sacred place, and had shown that they did not even take into account the advanced age and spiritual stature of the victim. The Criminal Court of Damanhur then submitted the sentence to the Mufti of Egypt, the Islamic religious authority in charge of issuing fatwas (legal opinions based on the Sharia) on relevant issues (in Egypt, a death sentence cannot be final unless approved by the Mufti). More than a year later, on July 1, 2020, the Supreme Court of Cassation of Egypt confirmed the sentence of death sentence pronounced in previous judicial proceedings against Wael Saad Tawadros, while it sentenced monk Falta'os al-Makari to life imprisonment as an accomplice in the same crime. The death sentence of former monk Wael Tawados was carried out in May 2021 (see Fides, 10/5/2021).
The Abbot was 64 years old, a native of Tanta, a graduate in medicine, Anba Epiphanius had entered Saint Macarius the Great monastery, in Wadi Natrun region, in 1984, and was ordained a priest in 2002.
Researcher and scholar, he had worked on the translation from Greek to Arabic of several books of the Bible. The monks of the Monastery of St. Macarius had elected him by majority as their abbot on February 3, 2013. Disciple of Matta el Meskin - spiritual father and key figure and in the recent history of the Coptic Orthodox Church - Anba Epiphanios lived intense relationships of spiritual communion with friends and monastic communities of the Catholic Church.
On the wave of emotion caused by the tragic story of Anba Epiphanios, the Coptic Church had accelerated the process of critical discernment on the condition and conduct of monastic communities, which had already been underway for some time. The Committee for the monasteries of the Coptic Orthodox Holy Synod (see Fides, 6/8/2018) had laid down 12 rules - ratified by Patriarch Tawadros II - aimed at all those who live the monastic condition in the Coptic Orthodox Church should abide by. Monks and nuns were asked to close their personal accounts and any blogs on social media, considered with critical eyes as tools used above all to spread "confusing ideas". Pope Tawadros also ratified the order to suspend the acceptance of new candidates for monastic life for a year, and that of regulating in a more rigorous way visiting times and pilgrims to the monasteries. Among the 12 disciplinary measures there is also the prohibition for monks and nuns to receive donations from the faithful, who can only be collected by the abbot or abbess of the monastery. (GV) (Agenzia Fides, 29/7/2021)

ASIA/PHILIPPINES - No to the reinstatement of the death penalty: the Church supports human dignity and the option for life