AMERICA/BRAZIL - 36 years after the murder of Father Ramin: by following his example, we renew our commitment to the poor and creation 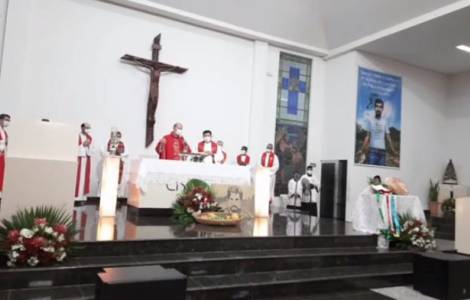 2021-09-22
Qualified missionary animators: course to deepen the history and objectives of the Mission Day, Missionary Month and the Missionary Campaign

2021-09-06
Independence Day "should make us recognize that we are all brothers, including those with whom we disagree"

Ji-Paraná (Agenzia Fides) - Father Ezechiele Ramin, a Comboni missionary (MCCJ), from Padua (Italy), arrived in Brazil in 1983, in the diocese of Ji Paraná, which includes the central part of the State of Rondônia and the extreme northwest of Mato Grosso. In the region there was a situation of social inequality, large landowners routinely resorted to violence to expand their properties. The missionary joined the indigenous and small rural workers in the non-violent struggle for the right to land, work and a dignified life. On July 24, 1985, Father Ezechiele was brutally murdered while returning from a peace mission: he had met a group of settlers to persuade them not to take up arms against the landowners. Before he died, he whispered the words "I forgive you". On March 25, 2017, the diocesan phase of the Cause for his beatification ended. Almost forty years after the event, the memory of Father Ezechiele is still very much alive in Brazil, especially among indigenous peoples, farmers and the simplest people (see Fides, 3/9/2015; 27/3/2017).
On the 36th anniversary of the missionary's death, on July 24 and 25, in the diocese of Ji-Paraná, two thanksgiving masses were celebrated for the life and mission of Father Ezechiele Ramin: on 24 in Cacoal and on July 25 in Rondolândia, where he was executed. The masses were celebrated by the Bishop of Ji-Paraná, Monsignor Norberto Foerster, and by Father Dario Bossi, provincial superior of the Comboni missionaries in Brazil. According to information released by the Bishops' Conference of Brazil (CNBB), sent to Fides, in the commemoration Father Dario Bossi underlined: "Let us remember and renew the commitment of the local Church united with the many communities throughout Brazil that celebrate, renew and remember the martyrial commitment of Ezekiel for a full life, for land, work and for a nature that has its luxuriant forest to be shared by all". For Father Bossi, celebrating the memory of Father Ezechiele means - together with Pope Francis and the Church of Pan-Amazonia - listening to the cry of the earth and the cry of the poor: "With Ezekiel's commitment to the poorest, we must renew this alliance between the peoples of the earth and creation, as Pope Francis underlines in Laudato Sì". For Monsignor Norberto Foerster, Father Ezechiele had the same ecclesial dream as Pope Francis expressed in Laudato Sì: "He wanted to take care of the roots of the peoples of the Amazon. He defended small farmers who do family farming without pesticides and his ecclesial dream was of small communities of the poor and humble. Father Ezechiele is still alive in today and is still alive in this post-synodal exhortation of Pope Francis’, Laudato Sì". The Archbishop of Porto Velho, Monsignor Roque Palosqui, stressed that Father Ezechiele "embraced what the Latin American Episcopate had found in Medellín: the Church cannot remain indifferent to the social injustices that exist in Latin America, which keep our peoples in a painful poverty that in many cases is human misery. Father Ezechiele was aware that the Church needs to be missionary, a missionary Church is the one that proclaims and denounces what goes against life and especially the life of the little ones and life of all creation". (SL) (Agenzia Fides, 27/7/2021)

AMERICA/MEXICO - A priest killed in the state of Morelos