ASIA/MYANMAR - Demonstrations of the Burmese diaspora around the world: recognition of the Government of national unity is being asked 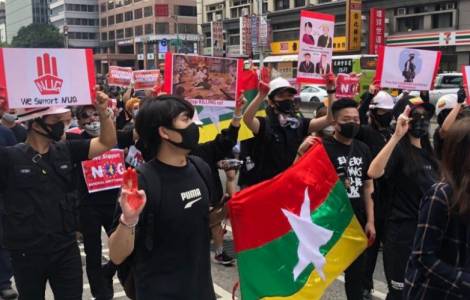 Venice (Agenzia Fides) - The Burmese diaspora and those who support civil resistance to the military junta met in various places on the planet on the weekend of July 17 and 18 to honor the many generations who died in Myanmar for a just cause, from struggle for independence to the current one for democracy. The meaning of this event, called "Global Myanmar Spring Revolution", which is held in Venice in Italy, explains Thuzar Lin, one of the leaders of the Burmese Community in Italy: "We will pray and honor, together with all the ethnic communities of Myanmar, the heroes who died, starting with General Aung San, up to the innocent civilians who are killed today". People will present themselves with a white T-shirt, a symbol of purity, and a black sash on the left arm, a sign of mourning for the martyrs. The demonstration was promoted by the National Unity Government (NUG) - in hiding in Myanmar - which intends to remember General Aung San (father of the anti-colonial resistance and Aung San Suu Kyi) and members of his cabinet, murdered after the victory of the independence movement in 1947. But it is also a way of remembering “the martyrs of today”, killed by the repression of the military junta which took place on February 1st.
The international meeting will invite the Association of Southeast Asian Nations (ASEAN), of which Myanmar is part with nine other countries, to recognize the shadow government of the country whose parliamentarians - recalls a note from the NUG sent to Fides - "were elected by over 84% of Burmese citizens in a free and fair democratic election". In the document, NUG recalls that it has adopted "a new federal Constitution" and that discussions are continuing with the various ethnic communities of Myanmar for "a transition towards true federalism". The request for recognition of the NUG, in addition to ASEAN, is also forwarded to all the governments of the countries where the individual events will take place, from the United States to Japan, from Great Britain to Canada. "The people of Myanmar - concludes the note from NUG - will show the world that, even if they live in different countries, the Burmese will be one person". In this way, the NUG aims to overcome the ethnic and religious differences that have poisoned the path of Myanmar for years and to promote peace, coexistence and social justice.
The reference to ASEAN reminds us that the organization had undertaken to carry out a plan of pacification and dialogue in five points which, however, has essentially never been started, while the violation of fundamental rights continues and, according to data confirmed by the Assistance organization Association for Political Prisoners, more than 900 people have been killed and more than 5 thousand are still in prison. (MG-PA) (Agenzia Fides, 16/7/2021) 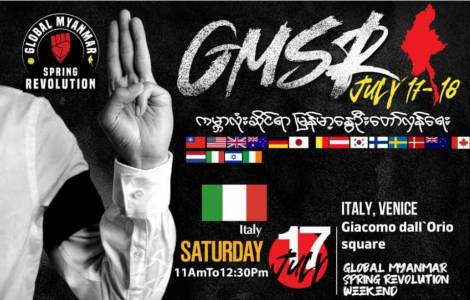