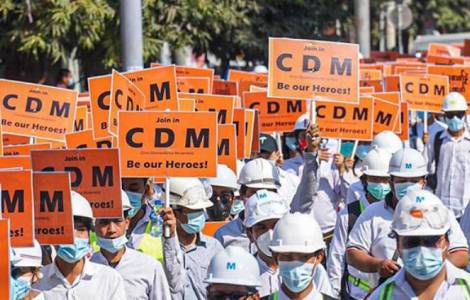 Jakarta (Agenzia Fides) - "First of all, I think that the humanitarian situation in Myanmar these days is very worrying. An increasing number of civilian demonstrators are being killed by the military. This violence must stop immediately". Father Baskara T. Wardaya SJ, professor of history at Sanata Dharma University in Yogyakarta, comments in an interview with Agenzia Fides on recent events in Myanmar and the attempt of ASEAN - Association of Southeast Asian Nations - to offer to mediate between the conflicting parties. "We cannot put political power above human lives. We are all human beings and we must respect them. Secondly, a number of questions need to be asked about the situation in Myanmar. One of them is whether, in taking power, the junta responded only to internal motivations or whether external forces encouraged it to serve their own interests. Thirdly, we must appreciate the initiatives of ASEAN aimed at intervening in the situation, given that Myanmar is a member of the organization in question. Indeed, the ASEAN summit on March 2 was a good step. However, it needs to be followed by a broader summit. At the same time, perhaps a "mini-summit" between Indonesia, Malaysia and Singapore would be more effective, before a larger meeting takes place. Apart from all this, I think the most important thing at the moment is to prevent the Myanmar military junta from killing its own citizens".
The summit which ended on March 3 between the ten foreign ministers of the member states of ASEAN does not seem so far to have blocked violence and repression. News and images from Myanmar show heinous acts and victims whose numbers are difficult to calculate - also because many wounded refuse to go to the hospital to avoid ever more massive arrests. According to the UN, the death toll reached at least 38 yesterday (more than 60 according to local activists).
The police and the army do not even spare religious leaders: four Baptist Pastors are among 10 people arrested on March 2 at a temple in Lashio, Kachin state, after police entered the building to capture fleeing protesters.
The daily report of the NGO “Assistance Association for Political Prisoners” (Aapp) writes that as of March 3 "a total of 1,498 people were arrested, charged or convicted in connection with the military coup of February 1. Among them, 4 were sentenced, two to two years imprisonment, one to three months and the last to seven days while 61 others were charged despite being on the run and 306 others, initially arrested, were released. A total of 1,192 are still in detention or have pending charges or are wanted (including the 4 convicted). So far, more than 50 people have been killed due to the violent and arbitrary repression".
As for ASEAN, the official statement released on March 2 evening mentions an "invitation to dialogue", although it was accompanied by various strong statements from some Ministers: Indonesian Minister Retno Marsudi, recalling the values of the founding charter of ASEAN, focused on the humanitarian aspect, also citing the necessary "aid to political prisoners" and the return of democracy. Vivian Balakrishnan, Singapore's foreign Minister, who called for an end to the violence and the start of a dialogue with a view to a negotiated compromise, "essential to finding a long-term peaceful political solution that includes a return to the democratic path".
Singapore, added the Minister, "strongly urges the immediate release of President Win Myint, Aung San Suu Kyi and other political detainees". In addition, he also "strongly supports the visit of the UN Special Envoy to Myanmar".
The Philippine Secretary of State Teodoro Locsin, after Manila initially claimed the situation in Myanmar was "another's internal affairs," said on the eve of the summit that the policy of non-interference "is not a global approval or a tacit consent regarding the wrongs perpetrated", calling for the immediate release of Aung San Suu Kyi and a "full return to the state of affairs" before the coup. All ASEAN members have signed the joint memorandum, which calls for dialogue, calls for the release of prisoners and supports the UN initiatives. (MG-PA) (Agenzia Fides, 4/3/2021)