AMERICA/HONDURAS - Haitian immigrants forbidden to take the bus or ask for rides, the Church welcomes them into the communities 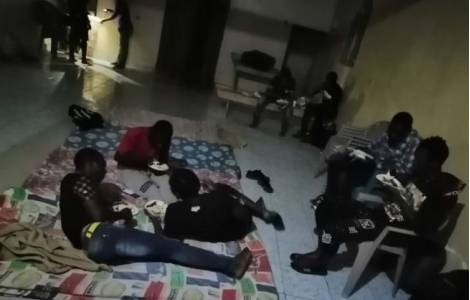 Tegucigalpa (Agenzia Fides) - "We welcome immigrants in our temples, in the churches of our communities in Quebradas, Cifuentes and San José de Mata Guineo. How sad it is that they cannot travel by bus or that they cannot be brought by car, because it is prohibited by the Honduran government": these are the bitter words of the Redemptorist missionary Father Eduardo Andrés Martínez, sent to Fides from Honduras. In fact, for some weeks now the Redemptorists of the permanent mission in the municipality of Trojes, in the department of Paraíso, have been committed to alleviating the suffering of Haitian immigrants who are going through great difficulties, at all levels, to reach the United States. In the note sent to Fides by the Redemptorist missionaries working in Central America, we also read the testimony of the provincial treasurer, Father Oscar Danilo Orozco Martínez, CSsR, who shares in a video what he saw during his trip to Honduras: "images which are very impressive: on the road to Trojes, seeing many people walking towards Tegucigalpa, which the Honduran government has prohibited from getting on means of transport, forcing them to walk long distances, many are pregnant women with children in their arms" . Also on social networks you can see what the Redemptorist missionaries have told, on the Facebook of the evangelization center "Jesus is alive" and in that of the Sacred Heart Parish of the Nueva Esperanza de Danlí district, which have become a refuge for Haitian migrants who, on their irregular journey to the United States, pass through Honduras and have denounced repeated violations of their human rights. Mgr. José Antonio Canales Motiño, Bishop of Danlì, stressed the authorities' lack of response to the immigration problem, and also asked for mercy for Haitians, fraternity, kindness, protection against injustices, as well as food or financial support.
"Jesus said that on the day of judgment he will ask us how we behaved with the stranger, he himself says: I was a stranger and you welcomed me. As a Church we want to fulfill the mandate of Jesus and offer, according to our possibilities, a night of rest, a dinner or a breakfast, so that the passage of Haitian migrants through our country is less difficult. We will not stop as long as there are immigrants who need it", said the Bishop on social media.
Mgr. Canales further specified: "Regarding the authorities, I am ashamed. Which Honduran does not have a relative who went illegally to the United States? Do we know the suffering our brothers go during their passage through Guatemala or Mexico? Why do we behave like this towards them? I want to think that most Hondurans are not like that, but there are people who, because of the authority are stubborn towards these brothers and sisters. Immigrants just want their passage through Honduras to be smooth, they are not and will not be a problem for us".
The Bishop announced that the Redemptorist parish of Our Lady of Perpetual Help in Trojes has given life to the Pastoral Care of Migrants or Human Mobility. "So we can have more human resources of solidarity, moreover the regional director of Health contacted me to offer his assistance on the health issues that immigrants need", he added. More than 3,000 foreign immigrants were arrested in Honduras from January to June 2021 for illegally entering the country with the idea of reaching the United States, according to data from the National Migration Institute (INM). In fact, in recent years Honduras has become a privileged transit point for immigrants, especially Haitians, Cubans and Africans, who cross Central American countries to reach the United States. In recent weeks, according to Fides sources, the number of Haitians has increased enormously compared to other groups. (CE) (Agenzia Fides,7/7/2021)