VATICAN - Pope Francis delivers the pallium to 34 metropolitan archbishops, 9 from the territories of Propaganda Fide 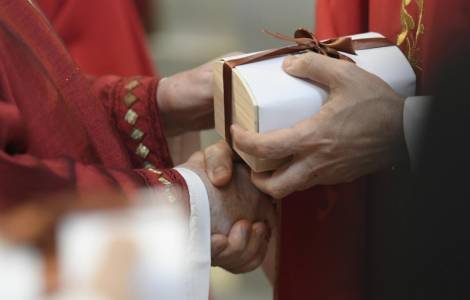 Vatican City (Agenzia Fides) - Before the Eucharistic celebration that he presided in the Vatican Basilica for the Solemnity of the Holy Apostles Peter and Paul, on Tuesday, June 29, the Holy Father Francis blessed the pallium which was delivered to the new Metropolitan Archbishops appointed during the year.
The Pallium, taken from the Confession of the Apostle Peter, symbol of the bond of communion between the Pope and the See of Rome with the Churches of the whole world, will be imposed by the Papal Representative on each Archbishop during a celebration that will take place in their respective Particular Churches. "This sign of unity with Peter - the Pope said in his homily - recalls the mission of the shepherd who gives his life for the flock. It is in giving his life that the shepherd, himself set free, becomes a means of bringing freedom to his brothers and sisters".
The Pope delivered the pallium to 34 metropolitan archbishops, 9 of them ordinary from ecclesiastical circumscriptions entrusted to the Congregation for the Evangelization of Peoples, in Asia (6) and Africa (3). As for Asia, 4 archbishops come from India, 1 from Indonesia and 1 from Pakistan: Monsignor Petrus Canisius Mandagi, M.S.C, Archbishop of Merauke (Indonesia); Monsignor Raphy Manialy, Archbishop of Agra (India); Monsignor Anthony Poola, Archbishop of Hyderabad (India); Monsignor Sebastian Kallupura, Archbishop of Patna (India); Monsignor Victor Lyngdoh, Archbishop of Shillong (India); Monsignor Benny Mario Travas, Archbishop of Karachi (Pakistan). As for Africa, the three Metropolitans come from the Ivory Coast, the Democratic Republic of the Congo and South Africa: Monsignor Ignace Bessi Dogbo, Archbishop of Korhogo (Ivory Coast); Monsignor Fulgence Muteba Mugalu, Archbishop of Lubumbashi (Democratic Republic of the Congo); Monsignor Mandla Siegfried Jwara, C.M.M., Metropolitan Archbishop of Durban (South Africa). Among the other metropolitan archbishops we remember Archbishop Tadeusz Wojda, SAC, Archbishop of Gdańsk (Poland), who from 1990 to 2017 spent long years of service in the Missionary Dicastery, first at the Pontifical Society for the Propagation of the Faith and then in the Congregation for the Evangelization of Peoples, of which he was Official, Head of Office and Undersecretary.
In his homily, the Holy Father said: "Two great Apostles of the Gospel and two pillars of the Church: Peter and Paul. Today we celebrate their memory. Let us take a closer look at these two witnesses of faith. At the heart of their story is not their own gifts and abilities; at the centre is the encounter with Christ that changed their lives. They experienced a love that healed them and set them free. They then became apostles and ministers of freedom for others"..."The Church looks at these two giants of faith and sees two Apostles who released the power of the Gospel in the world, only because they were first freed from the encounter with Christ". (SL) (Agenzia Fides, 30/6/2021)

AMERICA/COLOMBIA - The kerygma as the central point of evangelization