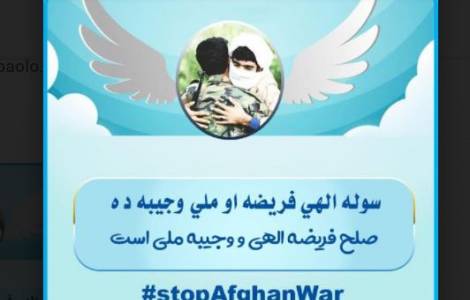 Kabul (Agenzia Fides) - "Peace is a religious obligation, a political necessity, a request of the whole nation". Thus reads one of the messages of the national “StopAfghanWar” campaign. Launched two days ago on social media by some Afghan non-governmental organizations, "the campaign first calls for a ceasefire. It has been our request for many months and will continue to be so until the violence ceases", explains Roshan Siran, director of the "Training Human Rights Association for Afghan Women" (THRA) to Agenzia Fides. According to Siran, the campaign also aims to send a political message: "We do not want decisions about our future to be made by other countries, by actors outside of Afghan society. We are here, as women, we want to be heard, we do not allow decisions to be imposed on us".
The Afghan government contact group will meet again the Taliban delegation in Doha, Qatar, where intra-Afghan dialogue began on 12 September 2020. So far they have only reached an agreement on the procedures to follow. "But violence in the country is increasing day by day and the government delegation does not have a clear strategy", says Siran. According to the director of THRA, "the Taliban cannot be trusted. They say they are fighting for Islam, but which Islam are we talking about? Our society is deeply Islamic, religious. There is no real religion that says you have to kill". A ceasefire is also indispensable for Mary Akrami, director of the "Afghan Women Network", a widespread network of women's organizations in the country. "Without the true, meaningful participation of women and society in the negotiation process, there can be no lasting peace", she explains to Fides. For Akrami, "the way the peace process is carried out is not acceptable to Afghan women: everything is in the hands of the usual jihadist leaders, protagonists of the old wars". "The government does not represent us, and even less the Taliban". For this reason, the director of the Afghan Women Network calls for the attention of the international community. The withdrawal of foreign troops, scheduled for September 11, should not correspond to a diplomatic disengagement. "They must help us to keep the focus on the peace process, so that the sacrifices of society are not lost, they are not useless". "We are in favor of peace, of course, but we do not accept that a false peace is imposed on us, made by military commanders, warlords, Taliban. Peace is such if it is seen as legitimate by the people, otherwise it is false". According to Akrami, the message from the population is unequivocal: "Stop war!". (GB-PA) (Agenzia Fides, 16/6/2021)

ASIA/PHILIPPINES - The Silsilah movement: the culture of dialogue and peace begins with children