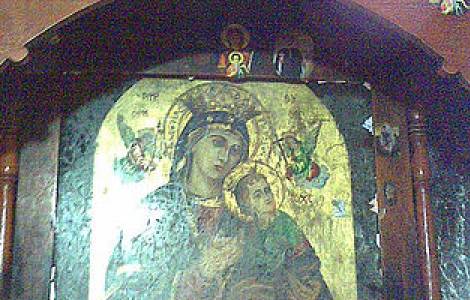 Samalut (Agenzia Fides) - While respecting the provisions in force to combat Covid-19, this year a large number of Egyptians, both Coptic Christians and Muslims, have been able to arrive at the Marian monastery of Jabal al Tayr, in the Coptic Orthodox diocese of Samalut, Minya province, to participate. in the week of festivities and celebrations in memory of the birth of the Virgin Mary. The anti-covid measures, which limit the presence around the Market Sanctuary with street stalls and food sales, have made participation in this gesture of popular devotion more sober and spiritually intense this year.
The Church of the Virgin Mary in Jabal al-Tayr ("Hill of the birds") was founded around 328 AD by the will of Queen Elena, mother of Emperor Constantine, and is one of the most loved and popular shrines by Coptic Christians. The original place of worship, carved into the rock, hosts liturgical celebrations only three times a year, on the occasion of three solemnities of the Coptic liturgical calendar.
The Marian Shrine also represents one of the most significant stages of the "Way of the Holy Family", the itinerary that unites places crossed, according to millenary traditions, by Mary, Joseph and the Child Jesus during their stay in the land of Egypt, where they were due emigrate, leaving Palestine, to escape Herod's evil designs.
According to local traditions, after arriving in the city of Samalut, the Holy Family crossed the Nile to the east, right where the Monastery now stands, and settled in the cave that is incorporated into the ancient church. The "hill of the birds" where the monastery is located, is also known as "Monte del Palmo" because, according to a local tradition, while the baby Jesus with Mary and Joseph were near the hill, a large fragment of rock detached itself, which risked killing them. Then the Lord Jesus stretched out his hand to stop the rock from rolling, and the palm of his hand remained imprinted on that rock.
The celebrations held each year at the shrine in honor of the birth of the Virgin Mary begin at the end of May and last for a week.
At Jabal al Tayr Monastery, one can experience devotion to the Mother of Jesus throughout the year from Muslim believers, who go on pilgrimage to the shrine to pray and invoke graces, especially in August, during the 15 days of festivities which precede and follow the liturgical feast of the Dormition of Mary. (GV) (Agenzia Fides, 5/6/2021)

AMERICA/VENEZUELA - Our Lady of Coromoto shows us that salvation is not only for some, but for all, without distinction of race or origin