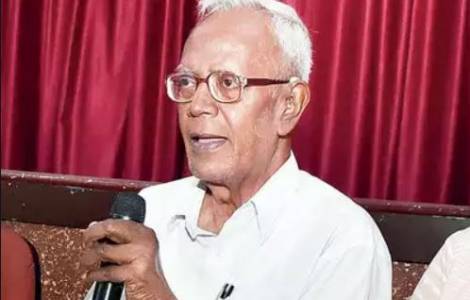 Mumbai (Agenzia Fides) - The High Court of Bombay, in the hearing held today 19 May, ordered a medical check of the health conditions of Father Stan Swamy, a Jesuit religious, accused and imprisoned for alleged sedition by the Indian government. The check will be carried out tomorrow, May 20, at the hospital, by several medical specialists who will then submit a report to the Court. The High Court intends to examine the documentation, and listen to the Jesuit via video conference in the hearing on May 21. In this way, it is clarified, the High Court will be able to make an informed decision on the request for release on bail of the father which was presented by the defense for health reasons. As Fides learned, the Jesuit was taken yesterday from Taloja prison to Jamsetjee Jejeebhoy hospital for some checks and therapies as well as to receive the first dose of the Covid-19 vaccine. At the same hospital, he will return tomorrow for the appropriate clinical examinations ordered by the Court. Over the past few weeks, some members of the religious's family as well as Jesuits and members of civil society organizations have expressed deep concern about Father Swamy's state of health "His health is deteriorating rapidly. He has a bad cold, fever, muscle and stomach aches", reported Irudaya Swamy, the priest's elder brother in recent days. Fr. Stan suffers from Parkinson's disease and needs the continued help of other prisoners to accomplish daily chores. According to his elder brother, Fr Swamy, who is weak and sick, could not even meet his lawyer on May 15. "Fr. Swamy was taken to hospital thanks to the intervention of the Minister of Interior of Maharashtra, following a request made by Ms. Supriya Sule, daughter of Sharad Power, former Prime Minister. A team of Jesuits led by Father Joe Xavier, Father Frazer and Father Cedric Prakash worked on the request. In addition, the media played an important role in putting pressure on the authorities. "We count on the support and the prayers of the faithful all over the world", Father Arockiasamy Santhanam, Jesuit and spokesperson for the National Forum of Lawyers for Religious and Priests in India, told Fides. In recent days, Father Santhanam wrote to the National Human Rights Commission asking the authorities at Taloja prison to strictly follow the anti-Covid-19 protocol. He asked for sick prisoners, especially Father Swamy, to be transferred to a hospital equipped for treatment. The appeal also calls on the Commission to set up a high-level team of magistrates, doctors and civil society leaders to thoroughly examine the situation in Taloja prison. In recent days, Shashi Tharoor, writer, former United Nations official and member of Parliament, in a petition presented on May 18, called for the release of Fr. Swamy in order to provide him with the necessary care for humanitarian reasons. "Father Stan Swamy must be released on humanitarian grounds. He has the right to have this principle applied. He should be hospitalized and treated like a human being", Tharoor said, Father Swamy was taken into custody after being arrested by a federal counterterrorism agency at his residence in Ranchi, capital of Jharkhand state, in eastern India. The 84-year-old cleric, educator and engaged in social works, was arrested on October 9, 2020 on the charge, still highly contested, of flanking Maoist rebels while he was involved in educational and promotional social works of indigenous people. He is allegedly accused of being the accomplice of the Maoist rebels in the context of the plot to overthrow the federal government and organize violence. The priest is one of 16 activists jailed on the same charges under the Prevention of Illegal Activities Act, related to a 2018 revolt in the village of Bhima Koregaon, Maharashtra. According to members of the organizations concerned, the police fabricated accusations and evidence against the activists to silence them after they criticized the policies of the Bharatiya Janata Party (BJP), the party in power at the federal level. Two bail requests were rejected by the special anti-terrorism court. On April 26, an appeal was filed at the Bombay High Court to challenge the two previous orders denying his release. The proceedings are now in the hands of the High Court. (SD-PA) (Agenzia Fides, 19/5/2021)