ASIA/INDIA - The Indian Bishops: closeness to the population affected by the pandemic; the government is clearly responsible 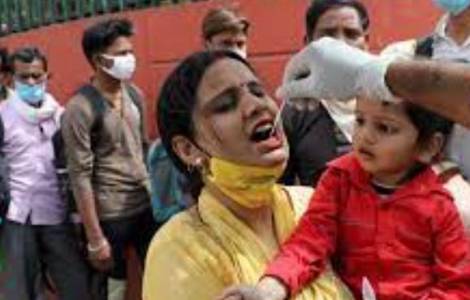 New Delhi (Agenzia Fides) - Deep concern and anguish for the second wave of Covid-19 that seriously affects the nation and full closeness and solidarity with the entire Indian population. With these sentiments, the Indian bishops intervene in the crisis phase the nation is going through, severely tested by the pandemic wave. The Catholic Church notes with extreme concern that India is reporting a record number of coronavirus cases and deaths, while there is an alarming shortage of medicines, vaccines and even oxygen supplies and hospital beds. The health system, observers say, is on the verge of collapse. Archbishop Prakash Mallavarapu, President of the Health Commission of the Indian Bishops' Conference (CBCI), explains to Fides: "It can be said that the main cause of this tragic situation is the complacency of the government and the lack of conscience public. Negligence is putting a strain on everyone while the country struggles with a record rise in infections". In fact, India has exported its more than 60 million Covid vaccines to 84 countries, while the country's vaccination centers suffer from vaccine shortages. "Certainly there has been a great error of evaluation by the government and the general public: little attention has been paid to the rules on social distancing, while the state machine has ignored the application of the rules", said Archbishop Mallavarapu.
"Most of the people in India are poor and the government must take this into account. Initially, we limited ourselves to establishing indefinite confinement, like the European nations, for example. However, prolonged isolation led to misery for the poorest. So later the rules had to be relaxed so that people could earn their bread. We are now in the midst of a tragic national emergency", says the Archbishop, indicating the lack of political and strategic foresight to face the pandemic. Even Bishop Chacko Thottumarickal, of the diocese of Indore, in Madhya Pradesh state, (central India), says he is shocked by the current health crisis: "Many are dying. I know an entire Christian family that was infected and died. Even one of our young Bishops is hospitalized with Covid. Media reports here regularly discuss the government's death figures, and some networks give much higher actual figures on deaths and infections", says Bishop Thottumarickal, former president of the Communications Office of the Federation of Asian Bishops' Conferences. "All 60 beds in our hospital are full and we are receiving at least 200 requests for hospitalization a day. What can we do?", he points out. Jesuit Father Cedric Prakash, engaged in the social and cultural field, tells Fides that "the situation across the country is in a state of chaos. People are dying from lack of medical supplies. Patients queue for treatment for hours, while the crematoria are unable to accommodate and dispose of the many corpses". Father Prakesh, who resides in Gujarat, western India, reports that at least five Jesuits died last week, and many other priests and nuns from other parts of India are affected by the virus or in serious condition.
"The government is blatantly lying about official figures of the sad reality. Often cases of deaths and infections go unreported", he points out. According to Father Prakash, "time is running out for everyone. The federal and state governments must act quickly to save the country from the pandemic". In addition to the reckless export of vaccines, oxygen and medicines, Father Prakash emphasizes that "the country is facing the brunt of the calamity due to its inability to limit unnecessary public gatherings such as huge crowds, in many areas, such as sports, politics or religion: crowds have continued to gather to watch the cricket match, for political demonstrations ahead of elections, for wedding celebrations and for Hindu religious rites and assemblies". (SD-PA) (Agenzia Fides, 26/4/2021)