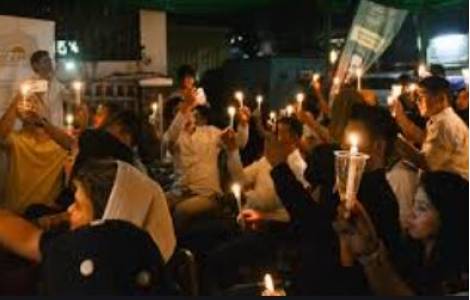 Jakarta (Agenzia Fides) - On March 28, Palm Sunday, the Sacred Heart of Jesus Cathedral in Makassar, capital of South Sulawesi, Indonesia, witnessed the bomb attacks, leaving two bombers dead and at least 20 people injured. This was the third such attack carried out by suicide bombers from Indonesia in recent years. The attackers were reportedly members of Jamaah Ansharut Daulah (JAD), an Islamic State-inspired group suspected of suicide attacks. The terror group bombed three churches in Surabaya, East Java, in 2018 killing 28 people. In 2019, a cathedral in Jolo in the southern Philippines saw a bomb killing 23 and injuring more than 100.
These are episodes that shake public opinion, politics and religious communities.
Asia, the world's largest continent, faces many problems such as sporadic poverty, social and economic inequalities, unemployment, majoritarian politics, digital divide, disasters, besides religious extremism and terrorism. These affect governments, communities, civil society groups, religious communities including Christian Churches, among others. Let's attempts to explain growing cases of religious extremism in Asia and the Church’s response.
To begin with, some of the countries that have been witnessing increasing religious extremism are India, Bangladesh, Sri Lanka, the Philippines, Myanmar, Indonesia, Pakistan. Undoubtedly, conflicts that can be considered of a religius nature are often having roots in social, political histories/complexities, ideologies and economic underpins.
For example, "a growing intolerance provides fertile ground for extremism with grave consequences for harmony if not addressed immediately", explains Dwi Rubiyanti Kholifah, the country director of the Asian Muslim Action Network in Indonesia. The analyst further says that a "false notion of superiority" and disagreements over "differences" shrink the space for exchange learning and prevent beneficial dialogue. It is not surprising to note that more and more people in some Asian countries, such as Malaysia, Pakistan, Indonesia, India and Bangladesh are drawn to discriminatory ideologies that are detrimental to social order and wellbeing. This calls for a shift from extremism to interfaith initiatives for common good. (...) - continues