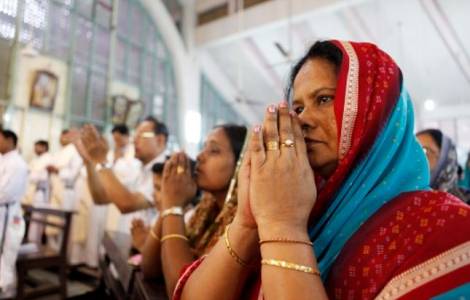 2022-07-27
Appeal by religious leaders: justice and security for religious minorities

Dhaka (Agenzia Fides) - "With pain and sadness we have followed the recent episodes of the seizure of power by the military and the inhuman atrocities on the peaceful demonstrations of citizens who are demanding democracy. We the Catholic Church in Bangladesh are the close neighbors of the Church in Myanmar, express our support and solidarity with the people and the Church in that country. We too share the pain and suffering of the peace-loving people of Myanmar who only want the democracy back". This was written by the Bishops of Bangladesh in a message, sent to Agenzia Fides, signed by Mgr. Gervas Rozario, Bishop and President of the Justice and Peace Commission of the Catholic Bishops’ Conference of Bangladesh.
The message reads: "We the Bishops’ Conference of Bangladesh on behalf of our faithful kneel down with Sister Ann Nu Thawng, who on February 8 knelt in front of the military and pleaded with them to stop shooting innocent people and instead to shoot her. We too suffer when the people of Myanmar suffer. We too as neighbors feel the pain in our heart for the deprivation and oppression of the people of Myanmar. We call on the military junta of Myanmar to be sensible and to sit with the relevant people for dialogue in order to solve this political crisis of the country, instead of shooting their own fellow citizens. We join the Church in Myanmar in prayers and adorations seeking God’s love and mercy on the people and nation of Myanmar".
The bishops of Bangladesh recall that Myanmar's military staged a coup on Feb. 1 and ousted the National League for Democracy (NLD) government, and imprisoned president, ministers, MPs and especially Aung San Su Kyi. The military accused the government of fraud in the recent elections and corruption. After the coup, General Hlaing, at the head of the army, justified the coup by stating that "the military are on the side of the people and form a true and disciplined democracy". "In reality we read in the media every day that the military shoot at people whose only fault is the desire for democracy and peace. So far they have killed more than 600 unarmed people in peaceful protests.
The protests over the coup have been the largest since the so-called ‘Saffron Revolutio’ in 2007. "The protesters include teachers, students, lawyers, bank officials and government workers. Christians of all denominations have taken to the streets with their fellow citizens. The military tried to terrorize the people, who were ready to die on the street. The Catholic Church too has taken the side of the people on the streets of Myanmar and its solidarity", the Bangladeshi Bishops write. And they continue: "Cardinal Charles Maung Bo, leader of the Church of Myanmar called for calm to all sections of people. He requested the military to release the imprisoned president, ministers, MPs and especially Aung San Su Kyi and to start a dialogue to resolve the national crisis. The Church in Myanmar is concerned about the future of the faithful and ethnic communities, such as Kachin, Karen, Shan. As the armed forces of Myanmar have ruled the country for many years, imposing culture and Buddhist traditions, it is feared that the military may impose undue restrictions on churches".
In this situation, the entire Catholic community in Bangladesh expresses solidarity and closeness to the Church and to the people of Myanmar, ensuring spiritual closeness and prayer. (PA) (Agenzia Fides, 13/4/2021)