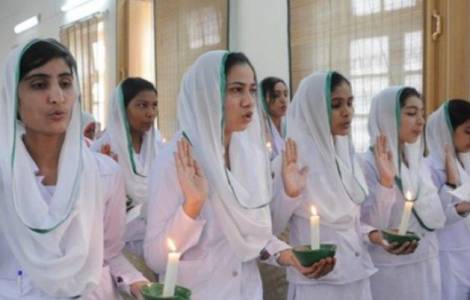 Faisalabad (Agenzia Fides) - Two Christian nurses from Faisalabad, a city of Pakistani Punjab, have been formally accused under the Pakistani penal code 295 B, one of the articles of the notorious "blasphemy law" of committing blasphemy against Islam. As Agenzia Fides learns, the First Investigation Report (FIR) n. 371/21 c was filed yesterday, April 9th. The case was registered at the request of medical superintendent Dr. Mirza Mohammad Ali of the civilian hospital in Faisalabad. On April 8, 2021, the two Christian nurses Mariam Lal and Navish Arooj removed and tore a sticker containing verses from the Holy Koran from a closet. The doctor claims that Navish Arooj removed the sticker and handed it to Maryam, who hid it in her hand when she saw a senior nurse, Rukhsana, coming towards them. At the request of the senior nurse, Maryam, according to her account, did not give her an adequate answer. The senior nurse took the sticker into custody and took photos. The next day, April 9, the Muslim nurse shared the matter with the hospital administrator and health inspector Faisal Yaqoob. They found both Christian nurses guilty of dishonoring the verses of the Holy Koran, filing a complaint for blasphemy. In the confusion that broke out in the hospital, upon hearing the news, one of the boys in the ward, Muhammad Waqas, tried to kill the Christian nurse Maryam with a knife, but Maryam was only wounded on her arm. Both nurses are now in police custody. Kashif Aslam, coordinator of the programs in the National Commission for Justice and Peace, of the Bishops of Pakistan, speaking to Fides, notes: "It is another false accusation against Christian women; there is a personal matter among the staff members that must be discovered in the investigation. The Christian faithful have a deep sensitivity on these issues, and they are also taught to respect other religions. I do not believe that the young Christian nurses desecrated the sticker containing the verses of the Holy Koran". Saleem Iqbal, a Christian human rights activist speaking to Fides, says: "It is alarming to see an increase in the number of unjustly accused in cases of blasphemy and the forced conversions of girls belong to religious minorities. This is the second case recorded this year: previously the Christian nurse Tabitha Gill was accused in a hospital in Karachi (see Fides, 29/1/2021, 30/1/2021 and 2/2/2021). Now this has happened in Faisalabad". He adds: "We appeal to Christian politicians to hurry to act to protect their people and ask the faithful to always be attentive to those who can trap them in such matters, using blasphemy for personal disputes or personal jealousies". (AG-PA) (Agenzia Fides, 10/4/2021)