ASIA/INDIA - New appeal for the release on bail of Jesuit Stan Swamy, in prison for sedition 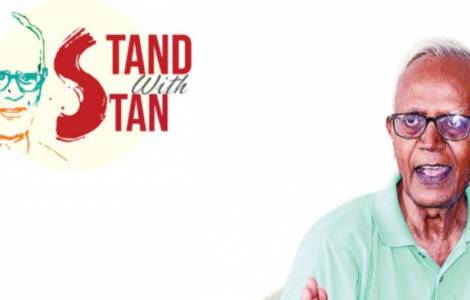 Mumbai (Agenzia Fides) – More than 2,500 people from all over India and other countries in the world have signed an appeal request to the Mumbai Court, against the judge's decision not to grant bail to Jesuit Stan Swamy, an 84-year-old religious, in prison since 8 October 2020 on alleged charges of sedition. In the statement sent to Agenzia Fides it is asked to review the request for bail of Stan Swamy, renewing the appeal for immediate bail for health reasons. The statement also calls for the abrogation of the UAPA (Unlawful Activities Prevention Act") and a return to the rule that bail is the rule and not the exception. Among the signatories who have taken a stand in favor of the Jesuit there are well-known academics, activists, artists, directors, economists, religious, priests, Jesuits, journalists, lawyers, writers.
"We are shocked by the rejection to grant bail presented by Stan Swamy at the special court of the NIA (National Investigation Agency) on March 22, 2021", reads the text sent to Fides. "The 84-year-old Stan Swamy - continues the statement – suffers from Parkinson's desease with severe tremors in both hands. He has problems drinking from a glass, bathing and washing clothes by himself. He also has other health problems. Before his arrest, he spent most of his time in Bagaicha, near Ranchi. He cooperated fully in the investigation. The refusal of bail of an elderly and sick person, with limited mobility and unprecedented violence against others, is beyond any human understanding".
"We know Stan as an exceptionally kind, honest and selfless person. We have the utmost consideration for him and his work. He has spent decades in Jharkhand working for the rights of the adivasis and dispossessed. It is ironic that while public support for Stan Swamy continues to increase, the court rejected the request for bail in the interest of the community. Civil society, several leaders and political parties and the Prime Minister of Jharkhand himself condemned Stan's arrest and expressed support and solidarity" , argue the petitioners.
The appeal notes that a recent report revealed how fake documents were smuggled into the computers of the accused in the case involving Fr. Swamy, and he too denied some of the evidence allegedly extracted from his computer. "It is disturbing that the court has decided to ignore this report, rejecting the request for bail".
The text concludes: "Stan Swamy is a symbol of the plight of thousands of prisoners languishing in prison for years under charges often fabricated to frame those who defend the less privileged or oppose the government. We demand immediate bail for Stan Swamy and repeal of the "Unlawful Activities Prevention Act" (UAPA). (PA) (Agenzia Fides, 31/3/2021)