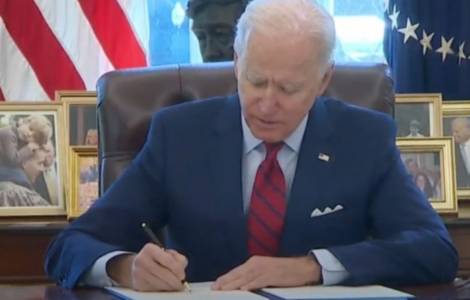 Washington (Agenzia Fides) - U.S. Senator Bob Menendez (D-N.J.), Chairman of the Senate Foreign Relations Committee, led 37 of his Senate colleagues in requesting the Biden administration join the U.S. Congress in officially recognizing the Ottoman Empire’s genocide against the Armenian people. "Administrations of both parties" the letter reads "have been silent on the truth of the Armenian Genocide. We urge you to break this pattern of complicity by officially recognizing that the Armenian Genocide was a genocide".
The contents of the letter have been made public in recent days also through a press release issued by the Armenian National Committee of America (ANCA). "President Biden, by virtue of his own strong Senate record and the bipartisan House and Senate resolutions he backed as a candidate - affirmed the Executive Director of the ANCA, Aram Hamparian - "is powerfully positioned to reject Turkey’s gag-rule, locking in permanent US government-wide condemnation and commemoration of the Armenian Genocide".
In September 2019 Biden, at that time candidate for the Democratic primary in view of the 2020 US presidential elections, had called on the United States to recognize "once and for all" as Genocide the "Great Evil" of the massacres perpetrated in 1915 against the Armenian population in the Anatolian Peninsula.
President Donald Trump, Biden's predecessor, as reported by Agenzia Fides (see Fides, 25/4/2017), had dedicated an official message to the planned massacres suffered in the Anatolian Peninsula by the Armenians in 1915, but by avoiding designating these systematic massacres as "Armenian genocide", following the line carried out by its last 4 predecessors in order not to provoke resentful reactions from Turkey.
In the past, US Presidents Jimmy Carter and Ronald Reagan had used the expression "Armenian Genocide," but then, from George H.W Bush to Barack Obama, the expression disappeared from the speeches of White House leaders in their official pronouncements. President Obama, also due to Turkish pressure on the US Congress, had set aside the promise made during an electoral campaign to recognize the genocidal nature of the massacres suffered in the current Turkish territory by the Armenians more than a century ago.
The new bipartisan initiative of US senators raises the question of the frequent use of the category of "Genocide" in the definition of US geopolitical strategies. An option full of concrete and operational implications: in the US system, when the crimes suffered by a community of people in any part of the world are recognized as genocide, the US President is required to implement all political, economic and military options capable of supporting the victims and bringing the culprits to justice. During the jihadist expansion on the territory of Iraq, in the United States a cartel of 118 acronyms and representatives of civil and religious groups organized pressure campaigns to urge federal institutions to recognize as genocide the actions perpetrated by jihadists of the so-called "Islamic State" against all minority religious communities, starting with Christians and Yazidis. The most relevant result of the campaign was the "Iraq and Syria Genocide Relief and Accountability Act", a law signed in December 2018 by President Donald John Trump, which qualified as Genocide the series of crimes perpetrated in previous years by jihadist groups on Christians and Yazidis in Iraq and Syria, urging the American administration to prosecute the groups accused as executors of its abuses. The law was described by some of the guests at the signing ceremony as a vital instrument in ensuring the survival of Christians in Iraq and in saving their community from extinction. Nonetheless, the Chaldean Patriarch Louis Raphael Sako, even in a recent interview with Agenzia Fides (see Fides, 3/3/2021), repeated that "If there was genocide, it struck all Christians and even more the Yazidis, but also the Shiites and the Sunnis in greater numbers. We must not separate Christians from others, the sufferings of Christians from those of others, because in this way a sectarian mentality is nourished". (GV) (Agenzia Fides, 26/3/2021)

ASIA/TURKEY - In the United Kingdom and Israel, new legislative proposals to sanction the recognition of the Armenian Genocide