AFRICA/NIGERIA - Seminarian Michael Nnadi, killed because he invited his kidnappers to conversion, in view of the Day of Missionary Martyrs 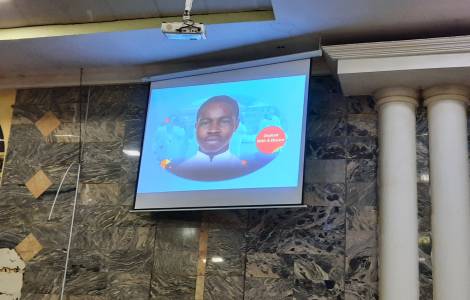 Sokoto (Agenzia Fides) - On February 1, 2020, His Exc. Mgr. Matthew Hassan Kukah, Bishop of Sokoto, Nigeria, announced the discovery of the body of 18-year-old Michael Nnadi, the youngest of the four seminarians who, on the night of January 8, had been kidnapped by armed men from the Major Seminary of the Good Shepherd of Kaduna, in northwestern Nigeria. The other 3 seminarians had been released. The murderer, Mustapha Mohammed, arrested by the police, confessed to the crime, claiming that the young seminarian "continued to preach the Gospel of Jesus Christ" to his kidnappers (see Fides, 13/1/2020; 21/1/2020; 3/2/2020; 4/5/2020). We offer his testimony in view of the 29th "Day of Prayer and Fasting in memory of the Missionary Martyrs" of 24 March (see Fides, 16/3/2021).
The Bishop of Sokoto, and Bishop of the seminarian, Mgr. Matthew Hassan Kukah, reminds Agenzia Fides of the events relating to the arrest of criminals. "On April 25, 2020, I received a phone call from Fr. Francis Agba, one of the formators of the Good Shepherd Major Seminary in Kaduna, who informed me that a detachment of a special team of the Nigerian Police from the Abuja Police Headquarters had just arrived there to announce the arrest of the criminals. I held my breath, shocked. The police, he said, had arrived with one of the kidnappers, Mustapha Mohammed, a 26-year-old man, a member of the gang of 45 kidnappers and bandits who robbed, kidnapped, tortured and killed many people along the road between Kaduna and Abuja, capital of Nigeria over the past four years. According to Muhammad, they had killed Michael because he kept asking them to repent and change their lives, letting go of their evil attitudes.
He said that what bothered them the most was that although Michael knew they were Muslims, he kept insisting that they had to repent and abandon their way of life. A woman Bolanle Ataga was murdered, along with Michael Nnadi, who had been kidnapped with her two daughters. According to Muhammad, Mrs. Bolanle was killed by the leader of their gang because she refused to give in to his sexual advances".
The Bishop explains that the tragic story of Michael and Bolanle constitutes a kind of metaphor to understand the deep scars that have been left by British colonialism and by the events that have occurred throughout history, "scars that have disfigured the face of religion in Nigeria and continue to increase the tensions existing between Christians and Muslims". Inspired by their faith, Michael and Bolanle were courageous martyrs. They were not afraid, emphasizes the Bishop. For Christians who mourn them, their death is not a loss. After the blood of Jesus was shed on the ground, the seeds of our redemption were sown.
"Today Michael's tomb stands guard and bears witness at the entrance to the Seminary, where he was a student - continues Mgr. Hassan Kukah-. His colleagues can walk pass the gates knowing they have a guardian angel. Both he and Bolanle, as well as Leah Sharibu, who refused to renounce her Christian faith and remains incarcerated, constitute metaphors for the suffering Church in Africa. Their testimony represents the spiritual oxygen that our lungs need so badly today. Together with the Ugandan martyrs, Saint Bakhita, Blessed Isidoro Bakanja and many others marked by the scars of the tortures received because of their faith, they are bearers of promise and hope for the Church on our continent. Their example should serve as a point of reference for our young men and women in Africa".
According to information sent to Agenzia Fides by Fr. Chris Omotosho, Director of Social Communications of the diocese of Sokoto, Michael Ikechukwu Nnadi and Raphael, his twin brother, were born on February 16, 2001 in Sokoto, after three other brothers. They were baptized on May 26, 2001 in the Holy Family Cathedral of Sokoto. They lost their father and mother respectively in 2003 and 2014. Since then, they were placed in the care of their maternal grandmother. After primary education, Michael went to St. Joseph's Minor Seminary in Zaria, Kaduna State for his secondary education, after which he expressed his desire to enter the Major Seminary. After a year of spiritual formation, in October 2019, Michael was admitted to the Good Shepherd Major Seminary, Kaduna for his studies in Philosophy.
"Michael lived a humble life. He was known this way since childhood - recalls his twin brother Raphael in an interview with Fides. He was a sociable, always the most orderly at school. He loved to read, listen to music and remind me to always pray. He was a devout person and this increased his desire for the priesthood. We shared a lot, we both loved to travel, to embark on adventures, we were always together. We will surely miss Michael for his way of life, he was humble, welcoming. He always put others before himself and showed true love. I always wanted him to truly become the priest he wanted to be, not just a priest but a good priest, a priest with the people and for the people, to set a good example for others". (SL) (Agenzia Fides, 20/3/2021)

ASIA/INDONESIA - Towards the Day of Missionary Martyrs: Rufinus Tigau, a young catechist murdered without reason

AMERICA/COLOMBIA - Four years after the kidnapping of Sister Gloria, "the Church continues to pray for her health and her prompt release"

AFRICA/MALI - The missionary kidnapped 4 years ago: "We ask the kidnappers to release Sister Gloria as soon as possible"