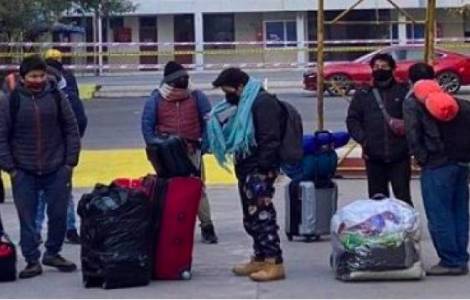 Santiago (Agenzia Fides) - The ecclesial institutions committed to migrants who work on the border between Bolivia and Chile appeal to the governments of the two nations so that the response to forced migration comes from "public policies based on respect for human rights, freedom of movement and international protection. We do not want a society that is insensitive and not very supportive", they say.
In an open letter, sent to Fides and addressed to the national and local governments of Bolivia and Chile by the national and local Caritas of both countries, by the Scalabrini Foundation, by the Chilean Catholic Institute of Migration (Incami) and by World Visión Arica, an urgent response to the increasingly dramatic migration crisis on the border between the two countries is requested.
"Migration, caused by violence, poverty, intolerance, abuse of power and lack of justice has opened a deep wound in the Latin American region. Thousands of men and women are forced to flee their countries and their homes in search of a dignified life", the letter states. Men, women, young people and children travel through dangerous and clandestine roads, with the constant fear of being arrested, of becoming victims of traffickers or of losing their lives, the petitioners write. Hunger, uncertainty and despair, accentuated even more by the pandemic, are their travel companions.
"For years we have seen and accompanied the faces of forced migration. Also in recent weeks, given the situation of the migrant brothers on the border that we share between Chile and Bolivia, we have tried to help and raise awareness of this reality", so that violence, xenophobia, exclusion, labor exploitation, human trafficking or smuggling or anonymous deaths are not normal.
After recalling that indifference is not a choice for Christians, the pro-migrant ecclesial institutions that work on the Bolivia and Chile border, appeal to governments to provide a response to forced migration through adequate public policies, however recalling the need to "promote and strengthen public policies aimed at responding to the needs of vulnerable populations in host countries, so that in our continent we achieve conditions of well-being, social justice, respect and promotion of the rights of all its inhabitants".
Finally, the signatories express the wish that governments open their borders to those "who seek to live in peace, reunite families and have a hope of life", and see ecclesial and non-ecclesial institutions as allies, in order to "promote sustainable, supportive and dignified solutions to forced migration". (SL) (Agenzia Fides, 3/3/2021)