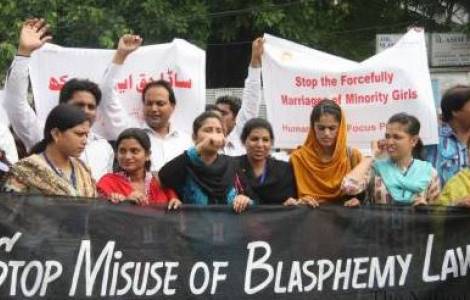 Karachi (Agenzia Fides) - "Tabitha Nazir Gill, a 30-year-old Christian, known for singing Gospel hymns in Urdu, the national language of Pakistan, was accused of committing blasphemy yesterday, January 28; she was taken by the police and released by the officers after an investigation. The police could not find anything to indicate that the woman in question committed blasphemy". This is what Nasir Raza, a Christian human rights activist involved in the case, which took place in Karachi, in southern Pakistan, tells Agenzia Fides.
Nasir Raza, who is also President of the "National Committee for Peace and Interreligious Harmony" in Sindh province, reports: "Tabitha Nazir Gill, who is a nurse at Sobhraj Maternity Hospital in Karachi, was accused by her colleagues, with whom she has been working for 9 years". Raza adds: "Tabitha, concerned, asked her Christian brothers and sisters to pray for her, saying: I am in a difficult situation, the Muslims in my hospital are accusing me. Subsequently, we learned that she was accused of blasphemy".
Nasir Raza continues: "They beat Tabitha, since the morning, claiming that she had spoken blasphemy against Islam. Tabitha was tied up with ropes, tortured and locked in a room. As soon as we learned of this, we immediately contacted the police security officers to ask for an intervention on the matter and to protect the Christian woman.
In the videos that some people present sent to inform us of the case and ask for the woman's protection, it is possible to see nurses and hospital staff beating Tabitha Gill, while she was denying the facts with which he was accused".
For the time being, the affair has had favorable consequences. The police officers took Tabitha into custody and, after carrying out an investigation, released her, handing her over to her family, with whom she moved to an unknown location for her safety".
According to information sent to Fides, it was a misunderstanding between colleagues which degenerated into the dangerous accusation of blasphemy, which in Pakistan also provides for life imprisonment or death sentence.
Nasir Saeed, Director of the NGO CLAAS (Center for Legal Aid Assistance & Settlement), in a note sent to Fides, condemns the incident and indicates: "It is a relief to know that the accusations against Tabitha, made by her colleagues were considered unfounded. Unfortunately, however, her life will never be the same again, as she has already left her home and gone into hiding. I would like to commend the role of the police in conducting a prompt, fair and impartial investigation. The police have a fundamental role in determining whether blasphemy is in fact committed or whether the charges are based on wind, with the sole aim of settling personal scores".
The Director of CLAAS adds: "According to our studies, the blasphemy law continues to be misused for private vendettas. In 2020 about 60 people, including nine Christians and forty-seven Muslims - mostly Shiites - were accused of blasphemy while at least three innocent people - a Christian, a member of the Ahmadiyya community and a Muslim - were killed in extrajudicial executions linked to accusations of blasphemy ".
Saeed launches an appeal: "It is time for the government to take a serious look at the issue to stop the growing misuse of the blasphemy law against innocent people and to make changes where necessary, since the wording of the blasphemy law allows for continual abuse". (SG-PA) (Agenzia Fides, 29/1/2021)

ASIA/PAKISTAN - About-face of the police: Christian woman from Karachi denounced for blasphemy