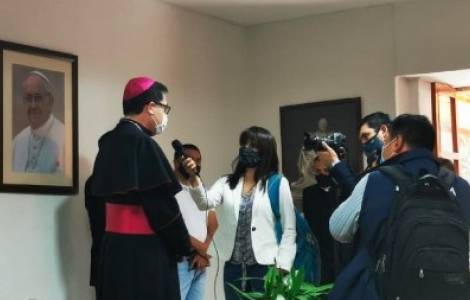 Pasto (Agenzia Fides) - "The pain for the more than 1,000 dead due to the Covid-19 pandemic in our region is reinforced by the deaths that continue due to the other pandemic, namely irrational violence": this is what declared the Bishop of Pasto, His Exc. Bishop Juan Carlos Cárdenas Toro, after the most recent and cruel episode of the murder of young Marbel Rosero, in Las Mesas, municipality of El Tablón de Gómez. "This and other murders cannot leave us indifferent", underlined the Bishop, who expressed his closeness as Pastor to the parents and relatives of the young woman and of the other four women who were murdered during the first week of the year. By celebrating Mass for this purpose, he also called for peace for the region. "Every human life is sacred", recalled Mgr. Cárdenas Toro, inviting those responsible to repent and stop these violent actions. He then called on the competent authorities to "do their utmost to guarantee the fundamental right to life of every person, in particular those whose rights have been violated and who are vulnerable: women, children of both sexes, adolescents, ethnic and peasant communities. People expect justice, truth and effective protective actions from you". Finally, the Bishop urged priests, men and women religious to promote days of prayer, through social networks and without provoking gatherings, "in order to raise prayers to God by asking for peace and reconciliation, but also to express, according to our faith, the rejection of violence and the commitment to respect for life". Another murder, of an 11-year-old girl, Mayra Alejandra Orobio Solís, took place in the Apostolic Vicariate of Guapi, where Mgr. Carlos Alberto Correa Martínez, expressed his pain and rejection of all violence. "We vehemently reject the torture, rape and subsequent murder of the little Mayra, found on land belonging to the Vicariate near Hogar Mónica, a place of refuge and protection for vulnerable children", said the Bishop, noting that, unfortunately, death events continue to increase in this territory. He further recalled that "every life is a gift, because someone gave it to us - God for us believers – and therefore no one has the right to destroy a life". Quoting Pope Francis, Mgr. Correa Martínez recalled that "violence generates more violence, hatred generates more hatred and death more death. We must break this chain which is presented as inevitable". By offering his prayers and closeness to the minor's relatives, he called on the competent authorities to speed up the investigation into this murder". There is a certain systematic nature in the persisting violations of girls and young people in our municipality, but intimidation and fear silence our community of Guapireño with a touch of complicity", underlined Mgr. Correa, inviting not to lose confidence in the Lord of life and to defend life from conception to natural death. (SL) (Agenzia Fides, 19/1/2021)

AMERICA/ARGENTINA - The wealth of indigenous peoples

AMERICA/HAITI - Three days of closure for Catholic schools and universities: release the kidnapped!

AMERICA/HAITI - The press announces the release of one of the kidnapped on Sunday, April 11

AMERICA/PARAGUAY - Archbishop of Asunción appeals to pharmaceutical companies: "It is not the time to make money at the expense of the sick"

AFRICA/MOZAMBIQUE - Humanitarian situation is increasingly alarming; the Bishops "Perspectives should be given to young people to stop the war"