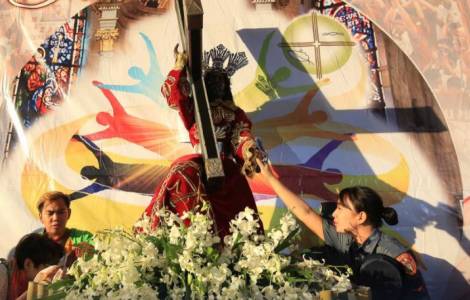 2020-12-17
The Islamic-Christian movement "Silsilah": Advent and Christmas, time of mercy

Manila (Agenzia Fides) - The pandemic and health protocols have not discouraged Catholics from meeting today, January 9, to pray and worship the "Black Nazarene", which is one of the most heartfelt devotions in the country. "The annual feast of Jesus of Nazareth is a demonstration of faith in Christ. In times of pandemic, the Filipino faithful are drawn to Christ even with greater intensity and fidelity", says to Fides Fr. Douglas Badong, vice parish priest of the church in the Quiapo district , where the image of the Black Nazarene is venerated.
As Fides learned, due to the pandemic and the health protocols in force, the usual "Translacion" (a Spanish term that denotes the procession held annually in Manila) and which usually sees the participation of one million people. Church authorities in the city, after consulting government officials, have decided to celebrate the feast of the Black Nazarene today, January 9, with limited participation.
In the church of the Quiapo district which houses the statue of Christ called "Black Nazarene", 15 masses were celebrated. "At each mass, only 6,000 people were allowed to participate in the Eucharistic celebration inside the church, with a total of about 90,000 people on the day. However, thousands of faithful who were unable to enter the church were nevertheless able to participate in the Mass on large screens placed outside the church", says to Fides Fr. Douglas Badong.
Bishop Hernando Coronel, Rector of Quiapo church, encouraged people to attend masses through social media and not to crowd int church due to government health restrictions.
While celebrating the first mass at 4:30 (local time), Bishop Broderick Pabillo, Apostolic Administrator of the Archdiocese of Manila, urged Catholics to "continue to love Jesus and to live the Gospel in daily life". "The Black Nazarene is a powerful magnet that attracts many people and we cannot stop this attraction. We are not attracted to an image. An image is only a symbol. We are drawn to the love of God", said Mgr. Pabillo .
The police have set up roadblocks around the church, where the religious icon is kept, to prevent people from getting too close. According to popular devotion, touching the image of the Black Nazarene, or simply being in his presence, can heal the sick or bring graces of all kinds.
A devotee, Margaret Seluda, mother of four, told Fides: "Even looking at the centuries-old statue of Jesus Christ has miraculous healing powers. This is a tradition of faith in the Philippines". "The feast reminds me and my family that we must live with God and for God, and live love for our neighbor", Antony Soriano, a young professional, told Fides.
The Church in the Philippines sees this devotion as a vibrant expression of faith in a predominantly Christian nation, with 80% of the over 110 million inhabitants being Catholics. Historically, the statue is believed to have survived a fire in the 17th century while being taken to the Philippines on a Spanish ship from Mexico. The statue is called "Black Nazarene" due to its charred color, after the fire aboard the ship, which it miraculously escaped. (SD-PA) (Agenzia Fides, 9/1/2021) 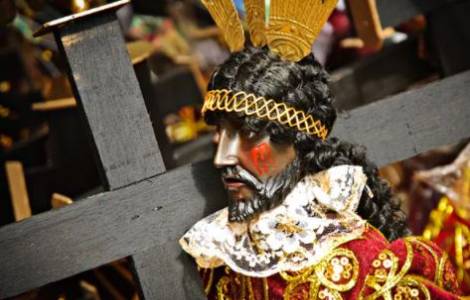 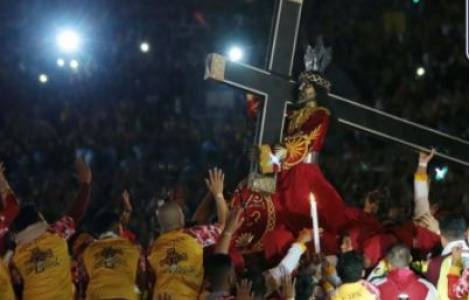 ASIA/KAZAKHSTAN - "Christ was born in Kazakhstan, in the encounter with the other", says the Bishop of Karaganda