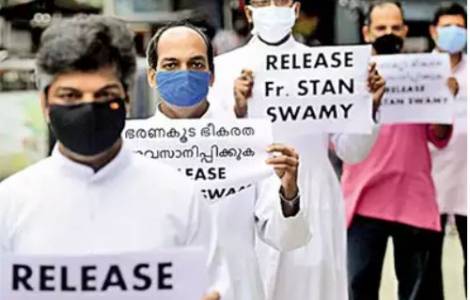 New Delhi (Agenzia Fides) - The Jesuits of India, along with an international network of civil society organizations, appealed to the Office of the United Nations High Commissioner for Human Rights (OHCHR) to obtain the immediate release of Father Stan Lourduswamy SJ, 83 years old, imprisoned since October 8 on charges of sedition along with other human rights defenders in India. As reported to Agenzia Fides, the appeal intends to raise the case of the illegal arrest of the cleric and other activists at an international level. It is a joint initiative of the Jesuits and of congregations and organizations present at the United Nations, in particular the Claretians.
The appeal is currently collecting thousands of signatures in many countries around the world.
Fr. Stan Swamy, SJ, is an 83-year-old Indian Jesuit priest, incarcerated for allegedly subversive activities. The Jesuits of India explain to Fides the antecedents of this case. It is possible to trace the violence against Dalits perpetrated in the state of Maharashtra on January 1, 2018. A young Dalit was killed and countless Dalits were injured. Although all the evidence pointed to the role of leaders of Hindu nationalist groups, the state deemed it appropriate to accuse and indict human rights defenders, known to stand up for the poor and vulnerable. 15 other people, engaged in human rights groups, were jailed for the same alleged violations of the "Unlawful Activities Prevention Act" (UAPA). The state claims that all these 16 people, including Fr. Stan, were collaborating with the Maoist party, an illegal formation, which wants to overthrow the elected government.
"Since the nationalist Bharatiya Janata Party came to power in 2014, it has used different pillars of government and media to suppress any dissent against its capitalist policies against the poor, against cultural and religious minorities characterized by clientelist logic", reads the appeal sent to Fides.
The text sent to the UN recalls that Fr. Stan is known for his long years of action in favor of the poor, the homeless, the indigenous Adivasis in India, making use of all legal and peaceful means in order to put an end to the violence they suffered. The 15 other accused are all human rights promoters, known for their commitment and courageous work in defense of the dignity of the poor. "Some of the accused, such as Varavara Rao and Fr. Swamy himself are old or sick. Yet an insensitive government is relentless in the vengeful pursuit of these people and the request for bail has been consistently rejected", it highlights.
On 10 December, International Human Rights Day, a strong international appeal reached the Indian government for the protection of Fr. Swamy and for his immediate release. OHCHR has already acknowledged the situation and sent a message to the Indian government to respect the International Covenant on Civil and Political Rights. Such efforts and appeals have so far gone unheard. (PA (Agenzia Fides, 8/1/2021) 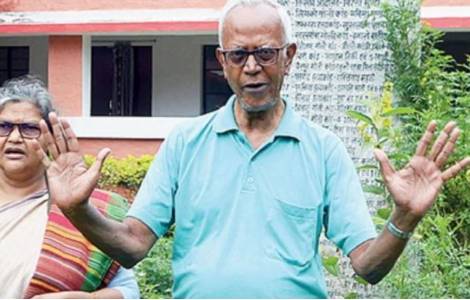