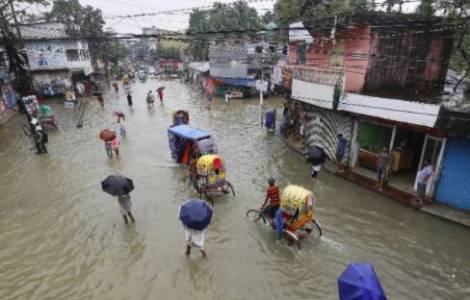 Bangkok (Agenzia Fides) - The number of people displaced due to natural disasters in the world is destined to increase to almost 14 million people, 72% of whom are affected by floods. Most of the displaced will be in South Asia and the Asia-Pacific region. The UN Development Program (UNDP) explains this in the 30th anniversay edition entitled "The Next Frontier: Human Development and the Anthropocene ", which has just published. The part dedicated to floods is just one of the many aspects examined by the document, consulted by Fides. The text notes that women are the most affected. Thus they represented more than 90% during the 1991 cyclone Gorky in Bangladesh, as well as during the 2004 tsunami or due to the effects of the 2008 cyclone Nargis in Myanmar. Floods are just one of the many challenges of a nature that appears to be the first victim of the "Anthropocene", the era of man.
The COVID-19 pandemic is the latest crisis facing the world, but "unless humans release their grip on nature", it won’t be the last, the Report notes. Focusing on both the environment and inequality, the document echoes what Pope Francis said in his Encyclical "Laudato Sì" in 2015, in which it is hoped that "integral ecology" can become a new paradigm of justice, because nature it is not a "simple framework" of human life. The United Nations Development Program, in line with the Pope's words, outlines in its latest report the need for a clear choice of world leaders: it is urgent to take courageous steps to reduce the immense pressure exerted on the environment, without which the progress of humanity will stop. The text places two other elements next to the traditional Human Development Index (HDI) - which measures the health, education and standard of living of a nation: carbon dioxide emissions and the ecological footprint of each country.
UNDP hopes that the current generation will be the first generation to correct the course. In the era of the Anthropocene, it is time for man to reconsider his paths "taking full account of the dangerous pressures we exert on the planet" and dismantling "the gross imbalances of power and opportunities that prevent change", states the text.
The next challenge for human development, says the report, will be one in which it becomes necessary to work "with" and not "against" nature, transforming social norms, values and government and financial incentives. Public action, UNDP concludes, can address the issue of inequality, within and between different countries with targeted policies: progressive taxation; the protection of coastal communities through preventive measures, investments and insurance (which could save the lives of 840 million people); the choice not to subsidize fossil fuels. "By tackling inequality, capitalizing on innovation and working with nature, human development could take a transformational step forward to support societies and the planet together", conclude the editors of the text. (MG-PA) (Agenzia Fides, 17/12/2020)

ASIA/MONGOLIA - Msgr. Marengo: "We must preach the Gospel with a whisper"