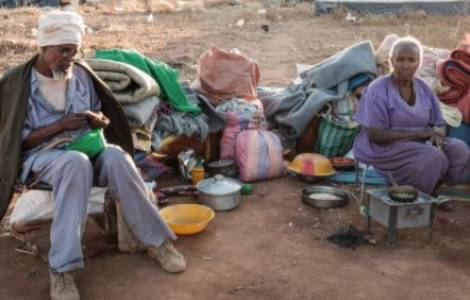 Asmara (Agenzia Fides) - The inhabitants of Macallè, in Tigray, are afraid. After the fighting in November, the city is under the control of the Ethiopian federal forces, but it is still not safe. Gangs of local criminals carry out raids by ransacking health centers, stores, warehouses. The Ethiopian military themselves carry out continual searches. "If they find valuable material (rings, necklaces, etc.), they seize them - explains Abba Mussie Zerai, an Eritrean priest of the Eparchy of Asmara who is in constant contact with Tigrayan priests. If they find weapons, photos or flags of the Tplf (the Tigrayan party that led the revolt against the Ethiopian government, ed.) arrests are carried out. People do not feel safe".
There are also rumors of an Eritrean military presence in Macallè from Tigray. However, there is no official confirmation that the military in question are employed alongside the Ethiopian military. "The presence of Eritreans has long been mentioned - continues Abba Mussie - but I doubt it. If, in the context of the conflict in Tigray, the alliance between Eritrea and Ethiopia is a certainty, I do not think that Eritrean units are there. No source consulted on the spot confirmed this to me".
What is certain, however, is the activity of Eritrean forces at the border. According to local sources, Eritrean soldiers arrested and took away from their village around a hundred people of the Irob ethnic group, who live on both sides of the inter-state border. Their fate is not known nor the reason for their arrest. The only certainty is that of their disappearance even though they played no role in the context of the conflict in Tigray.
A similar fate affected Eritrean refugees living in Ethiopian cities and in particular in Addis Ababa. "The Ethiopian security forces
- explains abba Mussie - have organized several bus convoys to take these people to refugee camps in Tigray. Hundreds of people who fled the oppressive regime of Asmara have been gathered in refugee camps in an area that is not yet fully pacified. They are risking their lives, that is certain. This is why we are launching an appeal so that they are taken to safety and, above all, not to be repatriated to Eritrea, where they would be exposed to reprisals and torture".
Meanwhile, in Tigray, the war does not seem to be over. Faced with the advance of the federal army, the Tigrayan militiamen withdrew and took refuge in the mountains. "The Tigrayans are a proud people and will continue to fight - concludes abba Mussie -. Those in charge of the TPLF and the main body of their troops are surely hiding on the heights. These are areas that they know well. They fought there for years, first against the dictator Mengistu Hailè Mariam and then against the Eritreans. I fear that the voice of arms will continue to resonate for years to come in these valleys". (EC) (Agenzia Fides, 15/12/2020)