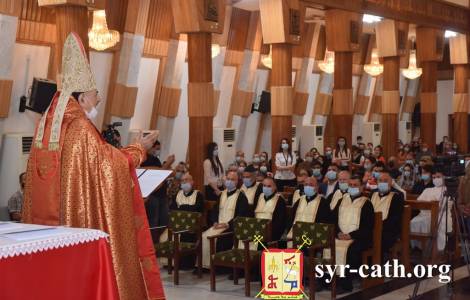 2020-12-12
Catholic Bishops: The mystery of Christmas and the Pope's visit make hope bloom, even in our deserts

Baghdad (Agenzia Fides) - "Our martyrs are the torches of faith that illuminate the path of our life and kindle the fire of charity towards all", said Ignace Yussif III Younan, Patriarch of Antioch of the Syrian Catholics, who celebrated on the eve of All Saints Day the victims of the Christian martyrs of the massacre perpetrated 10 years ago by Islamist terrorists against the Syrian Catholic Church of Our Lady of Help in Baghdad.
A total of 48 Christians were killed and 80 other people injured in the terrorist attack on October 31, 2010. The commando broke into the church during mass, which was attended by 150 people including priests, deacons, choir and faithful. The five terrorists took all those present hostage and demanded the release of members of the Al Qaeda jihadist network. Iraqi security forces along with US soldiers tried to free the hostages, but the terrorists set off explosives after the people had been forced to lie on the ground, causing the massacre. The first to be killed were two young priests, Father Thaer Abdal and Father Wassim Kas Boutros, shot while trying to stop the massacres. Father Thaer, who was celebrating the Eucharistic liturgy, had come down from the altar to try to talk to the terrorists, and was promptly killed by one of them. The same fate befell Wassim, who had come out of the confessional to try to stop the terrorists.
"The blood of our martyrs" Patriarch Ignace Youssif III recalled during his homily - was mixed with the sacrifice of the lamb on the altar, and their souls ascended to heaven looked down on us with tenderness, interceding for us". During the homily, the Primate of the Syrian Catholic Church expressed the hope that the cause of canonization for all 48 martyrs will be "completed by the competent authorities of the Holy See, so that we can soon celebrate their beatification rite".
The massacre in the church of Our Lady of Perpetual Help represents the most serious attack against Christians in Iraq in recent decades. After this massacre, many Christians were forced to leave Baghdad. "But our martyrs" remarked Patriarch Younan "assure us that their ultimate victory is forever, and that our true home is in Heaven, where there is neither tears, nor sadness, nor pain, but true happiness".
During his visit to Baghdad, Patriarch Ignace Youssif III Younan was also received by the Iraqi President, the Kurdish Barham Salih, who during the encounter reiterated his commitment to curb the exodus of Christians from Iraq, and stressed that the Christian community represents a fundamental component of the Iraqi social fabric.
At the end of October 2019, the diocesan phase of the Cause of Beatification and Declaration of Martyrdom of the 48 Christians killed in the church of Our Lady of Perpetual Help ended in Baghdad. There is also little Adam, 3 years old, and a newborn who is only 3 months. (Agenzia Fides, 3/11/2020)

AFRICA/NIGER - After the release of the Italian missionary: "Attacks on Christians continue"