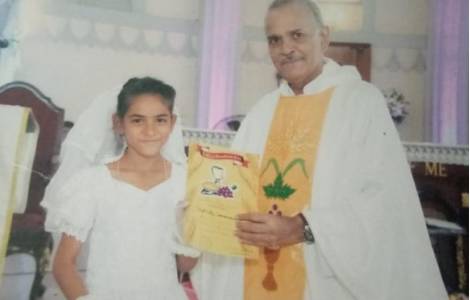 Karachi (Agenzia Fides) - Arzoo Raja, a 13-year-old Catholic from Karachi, was kidnapped, forcibly converted to Islam and then forced to marry a 44-year-old Muslim man, named Ali Azhar, who kidnapped her on the morning of 13 October. As confirmed to Agenzia Fides, this is the latest in a series of cases that has shaken the Catholic community in Pakistan.
Nasir Raza, human rights activist who assists Raja's Catholic family in this delicate situation, declares in an interview with Agenzia Fides: "This is umpteenth case, a story that repeats itself: on 13 October, the girl was kidnapped, and on the same day she was forcibly converted to Islam and forced into an Islamic marriage with impunity. She was playing at home. She went out to go to a shop and never came back. After her disappearance, the family filed a First Information Report against unknown persons around 5 pm".
Nasir Raza explains: "Arzoo is a 7th grade student and, as evidenced by her birth certificate from the National Database and Registration Authority (NADRA), she was born on July 31, 2007", and adds: "The girl's family is in shock and very tense. The inappropriate behavior of the police at the police station is another challenge for the family, in the throes of suffering and despair".
In fact, the police dismissed the case because, on the evening of October 14, the kidnapper's lawyer appeared at the police station, presenting the documents that, according to him, would grant full legitimacy to the abductor: an "Affidavit", signed by Arzoo, who attests her free will for her conversion to Islam and for marriage; a "certificate of conversion to Islam" and a marriage certificate. The girl's parents were unable to do anything, even though they provided the girl's birth certificate and referred to the law that prohibits marriage under 18 years of age (according to Islamic law, it si allowed).
Anthony Naveed, a Catholic politician and member of the Provincial Assembly of Sindh Province, is currently dealing with the case and has visited the family. Speaking to Fides, Naveed said: "I offered the family legal assistance and I also spoke with the police officers for the analysis and review of the case". Anthony Naveed remarks: "The complaint filed now is weak because it is filed against unknown persons, but now that more details are known, correct information must be added, and the laws on child protection and child marriage must be recalled". Naveed concluded: "The increase in the number of kidnappings and forced conversions of Christian and Hindu girls is a very serious phenomenon. The increase in these cases is worrying, even though it is due to the narrow and sick mentality of very few people in Pakistani society. In the current context of social and political status, religious minorities constitute weaker elements and consequently minority women and girls become an easy targets for kidnappers and men who carry out forced conversions".
According to Anjum James Paul, a Pakistani Catholic, President of the Association of Teachers of Religious Minorities in Pakistan, "these kidnappings are against the law and constitute a pedophilia offense that the whole of Pakistani society, primarily the civil authorities, must fight with all their might. We ask for a strong and decisive government intervention to put an end to this criminal phenomenon against girls, the most vulnerable in society, and which gives Pakistan a very bad image".
As the NGO Human Rights Commission of Pakistan noted in a note sent to Agenzia Fides, every year at least 1,000 Christian and Hindu women are kidnapped and forced to convert and marry their aggressor. Many families do not report the crime or withdraw their complaints, in the face of threats against other family members. (AG-PA) (Agenzia Fides, 21/10/2020) 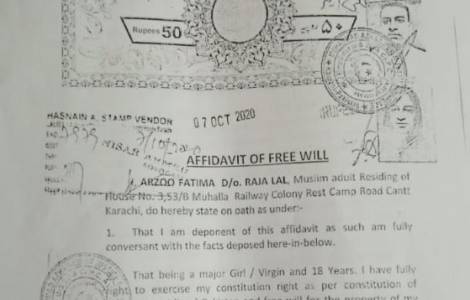 ASIA/INDONESIA - Christians in Sumatra, protected by the central government and punished in the province of Aceh

EUROPE/ITALY - Minors: 3 immigrants out of 5 in Africa and Asia