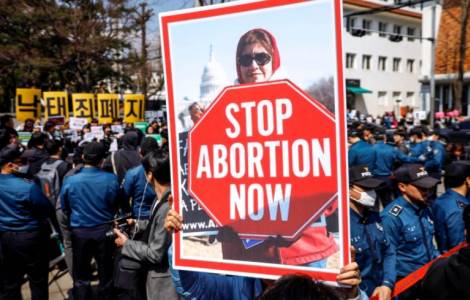 Seoul (Agenzia Fides) - "Abortion is unacceptable. The Church will always protect human life, from conception to natural death. Therefore, we hope the Korean government will allow a conscientious objection to the abortion law", said Bishop Mathias Lee Yong-hoon, at the head of the diocese of Suwon, who was elected CBCK’s new president at the Oct. 12-15 Fall General Assembly. The Bishop, who was previously President of the Bioethics Commission of the Bishops' Conference, comments on the debate about changes to the abortion law currently underway in the Korean parliament, observed: "The protection of the dignity of human life and the inalienable right to life and human dignity are values that cannot be compromised", he said. Based on this conviction, the Bishop asked the civil authorities for the recognition of a conscientious objection: "The right to conscientious objection enables doctors and nurses to refuse abortions requested by their patients. Health workers should not be punished just because they refuse to perform an abortion procedure".
The government recently announced a revision of the abortion act, changing both the Criminal Act and the Mother and Child Health Act to legalize abortions until the 14th week of pregnancy. Abortions for women who are between 15 weeks and 24 weeks pregnant will also be decriminalized under "certain conditions", such as medical, economic or social reasons as well as rape.
The bill, presented to the National Assembly on 7 October, revokes the total ban on abortions imposed in 1953. The announcement of the bill - which for the first time would allow the voluntary abortion in the country, except for rare exceptions introduced in 1973 - comes after the Constitutional Court ruled last year that the criminalization of abortion would violate the Constitution.
The Christian churches, which are very widespread in Korea, have meanwhile launched a campaign against the proposed change in the law. The new President of the Catholic Bishops added that "a better Korea can only come if one respects the life and culture of life". Song Young-chae, a Christian university professor, says: "Abortion contradicts my religious values, but also Korean values and those of our ancestors and society. Koreans should always place the highest value on human life, even if it has not yet seen the light of day".
Under current law, a Korean woman can be punished up to one year in prison or fined up to 2 million won (approximately $ 1,700) for an abortion, while a doctor or health care worker performing the abortion can be sentenced to up to two years in prison.
The government also justified the need for the amendment to the law on the basis of some data submitted by the Ministry of Health: 30 out of 1,000 Korean women between the ages of 15 and 44 had illegal abortions in 2005, and these data placed South Korea in the top three countries in terms of per capita abortion rate in the world, after Russia and Vietnam. According to opinion polls today, 75% of South Koreans are in favor of dropping the absolute ban on abortion. South Korea has a birth rate of 1.1 births per woman, well below the global average of 2.4, according to the 2020 report of the UN Population Fund. Report. (SD-PA) (Agenzia Fides, 20/10/2020)

AMERICA/MEXICO - Dehumanization and violence in society: "Why has life lost its value?"