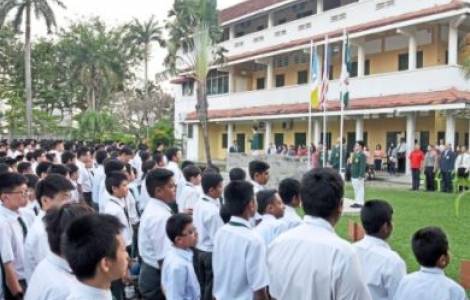 2021-02-24
Reopening of churches in Sarawak state during Lent

2021-02-05
The Archbishop of Kuala Lumpur to all citizens: "Let's promote fraternity"

2021-01-05
Diocese of Keningau opens the Year of St. Joseph, the saint who teaches trust in God

Kuching (Agenzia Fides) - Catholic educational institutes in Malaysia are authentic and precious means of evangelization, human development and personal growth: this is what was stated by Archbishop Simon Peter Poh Hoon Seng, at the head of the diocese of Kuching, remarking that schools and learning centers run by the Church "are an integral part of the development of the state, providing the basic foundations of education for children in rural areas".
As reported to Agenzia Fides, the Archbishop, in this month of October traditionally dedicated to the mission, remarked that "the Church has intensified her ministry in the field of education as an important means of evangelization, and to spread the values of the Gospel in Malaysia". "Catholic schools and universities have helped to grow and strengthen especially rural communities through adequate education in Sarawak State and in many other parts of the country", he explained.
In Sarawak, a federated state in Malaysian Borneo, extended along the north-west coast of the island, "in rural areas, education is not guaranteed to everyone, if not thanks to the presence of missionary schools", said the Archbishop, speaking in recent days at the first meeting of the authorities of the "Mission Schools" with the Unity for other religions (Unifor). Deputy Prime Minister Datuk Amar Douglas Uggah, Head of Unifor, chaired the meeting to discuss the needs of the schools.
The government is planning to provide funds so that Catholic Church-run schools can improve their structures and standards of missionary schools in the state. Uggah said he intended to ask Prime Minister Tan Sri Muhyiddin Yassin for appropriate funding. "The federal government has some funds for non-Islamic groups", he said. "We must ensure that the less fortunate schools, such as those in rural areas, without other sources of income, are effectively helped", he stressed, appreciating the fact that many private entities such as the Catholic Church and other Christian denominations are willing to open schools in remote rural areas. "Private schools are independent and consistent with their curriculum. They are also capable of providing very effective education", he noted.
Currently, there are 127 missionary schools in Sarawak with 113 primary schools and 14 secondary schools, mainly in the Kuching, Sibu and Miri divisions.
Of the total primary schools, there are 57 Catholic, 45 Anglican and 5 Methodist schools; while in secondary schools, 7 are run by the Roman Catholic Church, 5 by the Anglican Church and 2 by the Methodist Church. In addition, there are 92 crèches managed by the three Christian denominations.
The state of Sarawak is the largest in the Federation of Malaysia. Located in Malaysian Borneo, it covers an area almost equivalent to the whole of Peninsular Malaysia. Its capital, Kuching, is the largest city in the state, but also its economic center and seat of government.
Sarawak is the largest Federation It is a state characterized by ethnic, cultural, linguistic and religious pluralism. The main ethnic groups are Iban, Malay, Chinese, Melanau, Bidayuh and Orang Ulu. The population of the state of Sarawak counts 2.6 million inhabitants according to the 2015 census. Christians represent 42.6% of the total against 32.2% of Muslims, the other religious communities present are Buddhists, Hindus and animists.
The Federation of Malaysia is a multi-ethnic, multi-cultural and multi-religious country. Its population is made up of nearly 32.7 million people, 60% of whom are Muslims. (SD-PA) (Agenzia Fides, 16/10/2020)

AFRICA/MALI - Missionaries of the Immaculate Conception on the outskirts of Bamako: welcoming mothers in difficulty