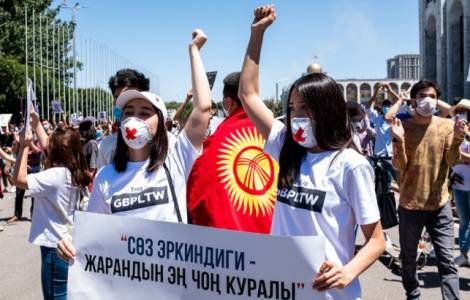 2020-10-23
Political crisis resolved with centralization of powers: people's expectations have been disappointed

Bishkek (Agenzia Fides) - "The situation is very tense: the opposition has occupied the White House, the seat of government and the politicians now have to decide what to do. On the other hand, the results of the October 4 elections were patently incorrect. There is great dissatisfaction in the country, so it was foreseeable that the population would decide to take to the streets. We are all very worried about what could happen. We are facing the third Kyrgyz revolution", said Burmachach Tomoeva, founder of the Kyrgyzstan-Italy National Association (ANKI), to Agenzia Fides, expressing concern about the uncertain social and political situation.
In Bishkek, the capital of the Central Asian country, numerous demonstrators took to the streets yesterday, October 5th, to demand the cancellation of the parliamentary elections held on Sunday, October 4th, which saw pro-Russian President Sooronbay Jeenbekov as the winner. The newly elected President is accused of electoral fraud and buying and selling votes. The protests led to the siege of the Kyrgyz government seat and the release of former President Almazbek Atambayev, who was being held pending trial for alleged corruption offenses. The police responded to the demonstrators' actions with tear gas and stun grenades: according to the Kyrgyz Ministry of Health, at least one person was killed and about 590 injured, of whom 13 seriously injured.
"Let us pray that the tense situation calms down. Thank God we are all well", says in a short message sent to Agenzia Fides, the Jesuit Fr. Anthony Corcoran, Apostolic Administrator of Kyrgyzstan, worried about the current social and political instability in the country. Kyrgyzstan, which gained independence from the USSR in 1991, went through two similar crises in 2005 and 2010. In both cases, the population took to the streets to protest against corruption and poverty and managed to oust the respective presidents from office, but this did not lead to an improvement in the living conditions of the country.
Poverty is widespread in this area of Central Asia: according to the Asian Development Bank, 22.4% of the population in Kyrgyzstan live below the poverty line. In this context, the small Catholic community is also active, which carries out numerous projects in the areas of social affairs and education, paying particular attention to promoting young people from poor families and rural villages.
There are currently three Catholic parishes in Kyrgyzstan in the cities of Bishkek, Jalal-Abad and Talas, but many small parishes are spread across the country's rural areas. The local Catholics can count on the spiritual assistance of seven priests, a religious and five Franciscan
Sisters. In 1997 Pope John Paul II established the Mission sui iuris. In 2006 Pope Benedict XVI elevated it to the rank of Apostolic Administration. In addition to the Muslim majority, 7% of the population are Christian, of whom 3% are Orthodox. Jews, Buddhists and other small minorities make up about 3% of the population. (LF-PA) (Agenzia Fides, 6/10/2020)