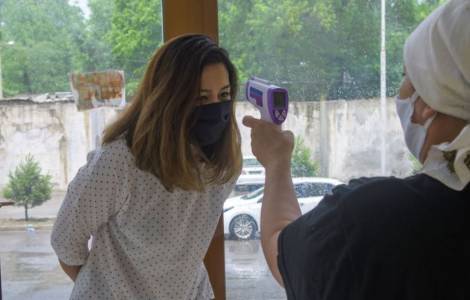 2022-07-30
Integration of people with disabilities and environmental sustainability: the work of human promotion of the Church

Dushanbe (Agenzia Fides) - With a project that will involve 6 thousand inhabitants of the town of Qubodiyon and 12 thousand people - including inmates and prison guards - in the penitentiary of the same district, the Tajik Church is involved in curbing the spread of Covid-19. Assistance and prevention activities - as we learn from a note sent to Agenzia Fides - will be carried out thanks to the action put in place by Caritas Tajikistan in collaboration with Caritas Luxembourg. The medical staff already present on site will coordinate the volunteers in actions aimed "at strengthening the health units to prevent and control the epidemic". The project aims in fact "to reduce the spread of infections and to speed up the diagnostic and therapeutic capacity", reads the note.
Caritas Tajikistan will also provide specialized equipment for the treatment of infectious respiratory diseases, but also means of individual protection, disinfectants, means of ventilation of hospital environments, to measure temperatures at a distance and medicines: "We aim to strengthen awareness of how to avoid contagion. To this end, communication materials and training courses were produced for prisoners and prison staff", reads the statement sent to Fides.
Since the beginning of the Coronavirus emergency, the Catholic Church in Tajikistan, through its assistance-operational arm which is the local Caritas, has taken steps to guarantee a service of distribution of masks and hand sanitizers to the homeless in the capital Dushanbe. Assistance service to the homeless had already started before the pandemic, but has been intensified with the progress of infections, especially among the poorest, who represent a large section of society. According to a survey conducted in April 2020 by the Asian Development Bank, in fact, in the entire country, which has 9 million inhabitants, 27.4% of the population lives below the national poverty line.
The work of the Church is addressed precisely to this segment of the population, also engaged on other fronts: for some years now, again through the work of Caritas, it has launched an important initiative to improve the water distribution system in the district of Jomi, an area in the west of the country, where the conditions of the water network represent an emergency for the population. In addition, assistance is provided to people with disabilities, while a project called “Supervision for success” allows the elderly to teach trades to orphans.
The Tajik Church is a small religious community in a 98% Muslim social context: the faithful are currently about one hundred, distributed between the two parishes of Dushambe and Qurǧonteppa. The Catholic presence in Tajikistan has been registered since the 1970s: the first faithful were mostly Germans from Russia, Ukraine and Lithuania, deported to the country at the time of the Soviet Union. Due to the communist regime, for years the communities of Tajikistan were completely isolated from the universal Church. It was Pope John Paul II, who gave a structure to the local Catholic presence, establishing the Missio sui iuris, on 29 September 1997. In this context, the charitable actions started already in 1983 by small groups, which officially merged into Caritas starting from 2004. (LF-PA) (Agenzia Fides, 28/9/2020)