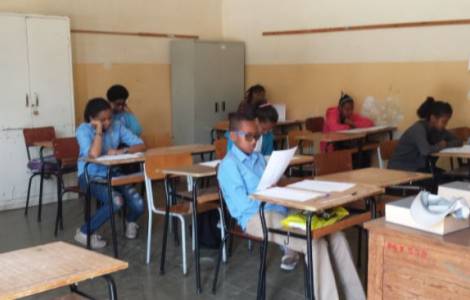 Asmara (Agenzia Fides) - The Italian school of Asmara has closed its doors. Born in 1903, it survived the period of colonialism, the British protectorate, the period of the Negus, that of the communist dictatorship and civil war. For decades it was a point of reference first for Italian children (children and grandchildren of settlers) and then for Eritrean children or for the children of mixed Italian-Eritrean couples. One cannot imagine Asmara without the Italian school" - says Joseph Zeracristos, an Eritrean Vincentian religious to Agenzia Fides. "It is an important cultural center for the whole country, a fundamental point in the national school system. Although recently, considering the impoverishment of the Country and the high cost of attendance, it had become a school for the children of Eritrean elites".
What led to the closure, a few days before classes began in Italy? In 2012, Italy and Eritrea signed an agreement for the joint management of the institute (which was owned by the Italian State and was configured as a private school). This agreement provided for the creation of a mixed technical commission. But, if Asmara immediately appointed its members, Rome did not. This first failure greatly annoyed the Asmara regime. Furthermore, in past years, under the last three governments, Italy has approved a series of measures that have, in fact, emptied the institution of Italian personnel, creating shortages regarding the staff.
The straw that broke the camel's back was the coronavirus epidemic. During the emergency, the Italian headmaster decided to start "distance learning" in March without notifying the government in Asmara. This was enough to irritate the Eritrean executive that decided to permanently close the school, revoking the license and withdrawing from the bilateral technical agreement of 2012.
Rosy, a former student observes: "This is a decision that saddens me. We studied in Italian but, at the same time, we took lessons in Amharic and Tigrinya (the languages of Ethiopia and Eritrea, ed). We were taught to look at reality with an intercultural perspective. Closing the Italian school in Asmara is therefore like turning a blind eye to the world. This choice impoverishes everyone: the Italians, who lose an important presence in the Horn of Africa, and the Eritreans, who in those classrooms learned to think with different eyes".
All school levels were present in the institute: nursery, elementary, middle, high school (scientific high school, accounting, surveyors, social sciences high school). The diplomas issued in Asmara were recognized by the Italian and Eritrean ministry of education. The boys and girls could then enroll in Italian universities without having to take entrance or language exams. "Surveyors and accountants - Rosy continues - were highly sought after because they were recognized as having a particularly serious and thorough preparation. Their professionalism has helped Eritrea to grow".
The closure interrupts a historical link between Eritrea and Italy, which has its roots in the era of colonialism but which continued thereafter. "It is sad to know that the Italian school has been closed - observes abba Mussie Zerai, an Eritrean priest from the eparchy of Asmara. For decades it represented a point of union between two cultures which, as a result of history (sometimes even tragic), met. Severing this bond means cutting an umbilical cord that united Italy and Eritrea".
According to abba Mussie, a precious tool will also be lost for the training of new generations. "This school - concludes the priest - could have become a privileged channel for training those boys and girls who will be the citizens of the future. We hope that Rome and Asmara find an agreement so that the school can reopen". (EC) (Agenzia Fides, 14/9/2020)