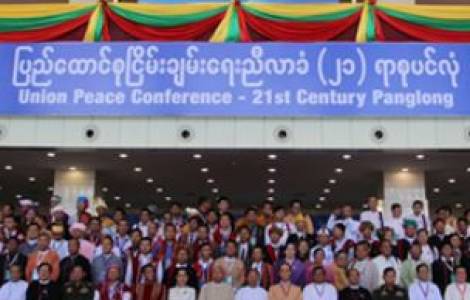 2020-07-21
The fruits of the mission: charity and interreligious coexistence in Kalaw

Naypyidaw (Agenzia Fides) - Myanmar is preparing for the two most important events of the year which, despite the restrictions for Covid-19, will be held with the times and methods already decided, albeit with some limitations: the fourth session of the “Panglong Peace Conference of the 21st Century”, as the summit to be held in the capital Naypyidaw in mid-August was named; and the legislative elections, scheduled for November. The Peace Conference saw the number of delegates decrease substantially, a measure accepted by all participants. All entities, organizations and groups that have fought against the central government and that have largely joined the peace process are invited to the meeting, scheduled for 12 to 14 August. Groups that have not joined or have accepted the Nationwide Ceasefire Agreement, NCA, signed in 2015, have also received the invitation, but without signing agreements. Among the prominent guests, not included in the agreement, are, for example, the Kachin Independence Organization and the United Wa State Party. The topics on the agenda concern both the implementation of the ceasefire agreement at a national level and further negotiations on the basic principles for forming a federal union. Such talks will continue even after the elections. It will be the first time that federalism, hitherto a taboo word, enters the negotiating table. The last conference was held between August 31 and September 4, 2016. That conference ended with a "roadmap" for national reconciliation and peace, which included seven steps, some of which remained a dead letter.
Several factors weigh on the peace process: the power of negotiation of the various forces in the field, which can count on the military pressure of the relative local armies; China's position - capable of controlling several groups along the border with Myanmar - and finally the ongoing war, especially in the Chin and Rakhine states, to which armed groups excluded from the negotiation are contributing and, as in the case of the Arab Army, inscribed in the list of terrorist groups. Just in recent days, two air raids by the Burmese army bombed the area between Kyauktaw and Mrauk U, about 150 kilometers from Sittwe, the capital of the Rakhine State, to respond to an attack by the Arab Army. The Mrauk-U-Kyauktaw section of the Yangon-Sittwe roadway was closed until late afternoon. The fighting took place in the fields on the east side of the road between the Abaungtaw dam and the Taungphyu dam. There are no reports of casualties yet but many residents have left the area. The area is about sixty kilometers from the territory of Paletwa, in Chin, where five Catholic priests are trapped by continuous armed clashes with the civilian population.
In mid-July, several Burmese religious leaders of various faiths - including Buddhists, Christians, Muslims, Hindus and Sikhs - as well as networks and interreligious groups working for peace - shared an appeal to all civilians, armed groups, political parties and other religious leaders to make everyone work for peace, harmony, unity and the consolidation of democracy in view of the general elections and the Panglong Conference. (MG-PA) (Agenzia Fides, 1/8/2020)

AFRICA/CAMEROON - Peace talks between government and separatists in the bishop's residence: the Church promotes dialogue and reconciliation

AFRICA/BURUNDI - "President, give us peace among Burundians": Archbishop of Gitega at the inauguration of the newly-elected Head of State