ASIA/TAJIKISTAN - Covid-19, the Church offers aid to the homeless 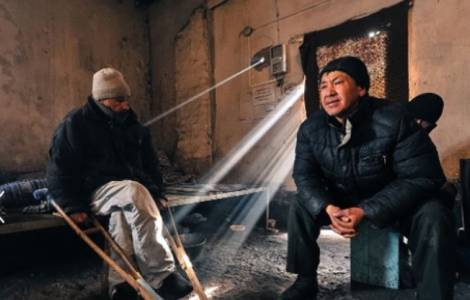 2020-05-25
Drinking water and waste management: the Church operates in the spirit of Laudato Sì

Dushanbe (Agenzia Fides) - With a service for the distribution of masks and hand disinfectants, Caritas Tajikistan has arranged for a project to help the homeless, while the Covid-19 health emergency is underway. This was announced in a note sent to Agenzia Fides, reporting that the clochard assistance project, now in its third edition, was launched last December in Dushambe, with the support of Caritas Italia and the Tajiko Ministry of Interior. Catholic volunteers offer psychological advice, legal support, but also the possibility of using showers, barbershop and laundry for the homeless in the capital,.
As pointed out by the Caritas Tajikistan executive, "homelessness is a relatively new phenomenon, which has appeared in society as a by-product of the country's market economy path". According to unofficial data, on average, in the capital, there are about 250 people without permanent housing, while an investigation conducted in April 2020 by the Asian Development Bank showed that in the whole country, which has 9 million inhabitants, 27.4% of the population lives below the national poverty line. The work of the Church is addressed to this group, working parallel on other fronts: for example, activities aimed at providing means of subsistence to people with disabilities are carried out, while a project called "Supervision for success" allows the elderly to teach professions to orphaned children. In addition, for some years, Caritas Tajikistan has launched an important initiative aimed at improving the water distribution system in the district of Jomi, an area west of the country, where the conditions of the water network represent an emergency for the population .
These are interventions and projects that the Catholic Church promotes with the aim of developing a fruitful partnership with civil institutions, of contributing to the common good of the nation, of showing the authentic vocation and mission of the Church, a small religious community in a social context which is 98% Muslim.
There are currently about a hundred faithful, distributed between the two parishes of Dushambe and Qurǧonteppa, who make up the Catholic community of Tajikistan. The Catholic presence in Tajikistan has been recorded since the 70s of last century: the first faithful were mostly Germans from Russia, Ukraine and Lithuania, deported to the country at the time of the Soviet Union. Because of the communist regime, the Tajikistan communities for years were completely isolated from the universal Church. It was Pope John Paul II who structured the local Catholic presence, establishing the Missio sui iuris, on September 29, 1997. In this context, charitable actions were started as early as 1983 by small groups, who officially joined Caritas starting from 2004. (LF-PA) (Agenzia Fides, 28/7/2020)

AFRICA/MALAWI - Church warning about discriminatory behavior towards people with HIV