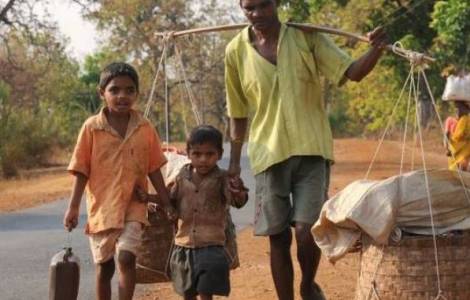 Ranchi (Agenzia Fides) - Bringing humanitarian aid, solidarity and consolation to humanity, without any discrimination of ethnicity, religion, culture, social class: it is with this spirit that the Archdiocese of Ranchi, in the Indian state of Jharkhand (eastern India), reaches and assists Muslim and tribal families with basic necessities, while the lockdown of activities due to Covid-19 is in force. As Fides learns, Archbishop Felix Toppo and Auxiliary Bishop Theodore Mascarenhas, together with priests, seminarians and young people, have helped over 300 needy families belonging to various sectors of society.
The initiative had a special echo and greater involvement on the occasion of the feast of the Sacred Heart of Jesus, on June 19th. "The feast indicates the overflowing love of the heart of God which flows to humanity through Jesus. Christians are called to share this same love with others", Archbishop Toppo said to Fides. The distribution of food kits included rice, legumes, soybeans, salt and other foods for the livelihood of needy families.
The president of the Catholic youth of the Archdiocese of Ranchi, Kuldip Tirkey, explained the meaning of the gesture to Fides, noting that "help is provided to all people in need without distinctions of caste, belief, ethnicity". Local community leaders organized the distribution everywhere and the initiative has received great appreciation in society, while the national lockdown, imposed by the federal government on March 25, tries to contain the spread of Covid-19. In many dioceses in India, bishops, priests and nuns have contacted migrants in difficulty, women, poor families and others by distributing food, medicine and other essential goods.
The special attention of the diocese of Ranchi to discriminated and disadvantaged groups - local Catholic leaders recalled - can also be seen from the recent appointment of a tribal Christian woman, who became vice-chancellor of a university in Jharkhand: in recent weeks Sonajharia Minz, professor at the prestigious Jawaharlal Nehru University of New Delhi, was named among the leaders of the Sido Kanhu Murmu University in Jharkhand. It is hoped that the appointment will help to overcome prejudices towards tribal peoples and inspire many more girls to undertake an academic path of studies.
About nine million tribals live out of 32 million inhabitants in the state of Jharkhand. About 1.5 million people in the state are Christians, half of whom are Catholics. (SD-PA) (Agenzia Fides, 26/6/2020)

EUROPE/ITALY - The Ministers of the Sick celebrate their founder: "The pandemic we are going through is not a divine scourge"