ASIA/INDIA - In times of pandemic, the Indian Church has accompanied and supported 11 million poor and vulnerable people 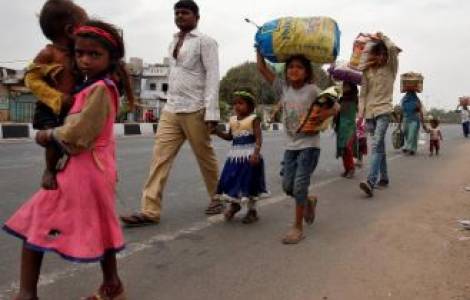 New Delhi (Agenzia Fides) - During the Covid-19 pandemic, the Church in India has reached and assisted at least 11 million people, poor and vulnerable, in the lockdown and confinement period which started on March 25 and still in progress in some special "containment areas". This is what a report of the Bishops’ Conference of India states which, citing data released by Caritas India, highlights that Indian Christians have responded with great generosity and commitment with respect to their presence and numerical consistency, that is 2.5% of the population in the country. As Fides learns, the balance of the community's work was drawn up in the recent summit with the participation of Cardinal Oswald Gracias, president of the Bishops’ Conference, and Archbishop Sebastian Kallupura, president of Caritas India, alongside the presidents of the regional Bishops Councils and the directors of the social development forum from all over India
The summit noted that 95.2% of migrants have lost their jobs and livelihoods, as confirmed by an survey conducted by Caritas India in 18 states most affected by the pandemic, including Uttar Pradesh, Bihar, Jharkhand, Odisha, Madhya Pradesh, Telangana, Chhattisgarh, West Bengal, Maharashtra and Assam.
"Migrant and poor workers are the ones who have suffered the most because of the lockdown imposed by the government to contain the coronavirus in India" confirmed to Fides Fr. Jaison Vadassery, Executive Secretary of the Commission for Migrants in the Bishops’ Conference of India (CCBI ).
In the face of the sudden humanitarian needs of thousands of people, parishes, religious orders, churches, NGOs linked to the Christian community have mobilized. In the Archdiocese of Bombay, each of the 124 parishes provided food rations to the poorest, those affected by Covid-19 and also the victims of the recent Cyclone Amphan. It is estimated that over 7,000 people are fed twice a day. The Bombay Archdiocesan Social Action Center, through its network of partner organizations, has collected donations and distributed essential goods worth more than 32 thousand US dollars. The beneficiaries are the elderly, the poor, the sick, the tribal, migrants, street children, the police officer and other vulnerable people. In the Archdiocese of Bombay, St. Xavier's College and other schools have made their facilities available to organize relief measures.
The lockdown of all activities and movements began on March 25; transport and services have gradually resumed since 8 June, while special "containment areas" are still active in some areas of the nation until 30 June. Millions of migrant workers have been blocked in different areas of the country, without work, food and shelter. (SD-PA) (Agenzia Fides, 13/6/2020)

ASIA/IRAQ - Chaldean Patriarch Sako: it is wrong to expect that the Pope's visit will solve all our problems