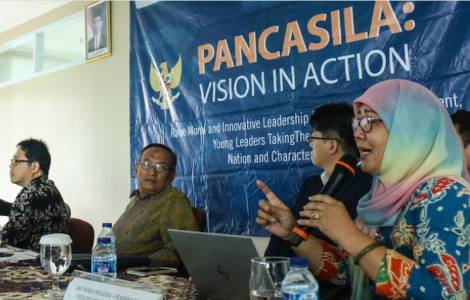 2020-08-08
The Catholic Church is always present where situations of poverty and illness are most urgent: the Camillians on the island of Flores help about 700 families

Jakarta (Agenzia Fides) - " Pancasila establishes how to behave towards others. With humanity, and consent in the national interest, which must be placed before our individual interest; finally it wants to see us engaged in social justice. That is why Pancasila is a platform. It is a platform that defines our identity but also a tool to understand what we are as a nation". This is what was pointed out to Agenzia Fides by Yenny Wahid, leader of the "Whaid Foundation", an organization created in 2004 by his father, Abdurrahman Wahid, known as "Gus Dur", an unforgettable president of Indonesia's new democratic course.
The ideology of Pancasila still plays a role of national cohesion in Indonesia, but also of religious coexistence that looks to social equality, all the more necessary in times of a pandemic. The "Five Pillars" of the charter was first presented on June 1, 1945 and formally promulgated in the Constitution of August 17 during the proclamation of independence, but the order in which they were set was changed: so, in first place, there is the right to practice one's faith (Ketuhanan Yang Maha Esa): "The principle states that we must believe in a Supreme God, not who we must venerate", specifies Yenny Wahid. It is the guarantee of religious freedom. Civilization, national unity, consensus and social justice follow.
President Sukarno gave the first iteration of the ‘Pancasila’ in his speech of 1 June 1945, the charter of the five principles on which the philosophy of coexistence of the vast archipelago is based. On that date, President Joko Widodo, known as "Jokowi", gathered the main leaders of the major religious organizations to discuss the gradual reopening of religious activities in 120 regencies or in cities that do not have Covid-19 cases. The meeting was attended, among others, by Cardinal Ignatius Suharyo, Archbishop of Jakarta, alongside the leaders of "Nadlathul Ulama" and "Muhammadiyah" - the two main Islamic associations in the Country. President Widodo asked for collaboration, in the full spirit of Pancasila, at a time when it is still necessary to follow the guidelines dictated by the ministry of health.
In a speech to the nation, Jokowi stressed that Pancasila remains the "guiding beacon" to relaunch the spirit of Indonesia, "care, mutual cooperation and brotherhood" in such a difficult moment. Recalling the birth of the "Five Principles", Jokowi admitted that the new pandemic has put a strain on the Country's resistance. In commenting the anniversary, the head of the administrative Board of the Nahdlatul Ulama H. Robikin Emhas said that "religion and Pancasila can support each other by strengthening" and that ideology and religion "are not always two things to choose from to discard the other". The general secretary of Muhammadiyah, Abdul Mu'ti Mu'ti, instead stressed how Parliament and Government must be more attentive in listening and accepting popular aspirations "without any personal or group interests using the power and voice of the majority in parliament". He also pushed political leaders to be more rigorous in implementing Pancasila, guaranteeing "social justice for all Indonesians".
Episodes contrary to this spirit remain isolated: the provincial administration of West Sumatra has banned a Google application that allows you to read the Bible translated into the local language minangkabau on your phone. (MG-PA) (Agenzia Fides, 10/6/2020)

AFRICA/EGYPT - Grand Imam of al Azhar: Islam and Christianity have never been at the root of wars