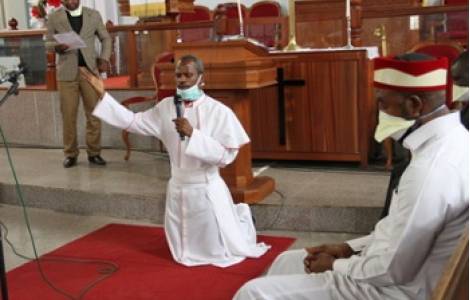 2020-06-16
A missionary: on the outskirts of Luanda the poorest are always the most generous

Luanda (Agenzia Fides) - "We were in the middle of Lent, a strong moment, a moment of preparation for the Easter of the Lord, when the state of emergency was decreed, while the news that came from other parts of the planet gave rise to another "virus", the virus of fear", reads the statement signed by Fr. Celestino Epalanga, Episcopal Vicar for the Social Area of the Archdiocese of Luanda and Secretary General of the Episcopal Commission for Justice and Peace and Migrants of CEAST (Episcopal Conference of Angola and Sao Tomé) on the consequences of COVID-19.
A fear justified by the breathlessness, underlines the document sent to Agenzia Fides, provoked by the new coronavirus "on the health systems of major world powers". "Aware of the precariousness of our health system, the question was inevitable: who will save us from this massacre?".
Conscious that "our help is in the Lord who created heaven and earth" and in order "to strengthen faith and the hope of the faithful, the Bishops encouraged the use of Radio Ecclesia, Radio Maria, Catholic television network, diocesan bulletins and parishes and social networks for the broadcast of Eucharistic celebrations, rosaries etc ... In religious communities moments of prayer and adoration of the Blessed Sacrament intensified and families became true domestic churches. On March 29, a prayer sequence took place in all religious communities, seminaries and Catholic families nationwide asking God to free Angola and the whole world from the pandemic".
"The new coronavirus has highlighted many vulnerable situations and has worsened the socio-economic conditions of many countries and Angola is no exception", says the statement. Over 70% of the Angolan population depends on the informal market to survive. The measures foreseen by the state of emergency have given rise to the phenomenon of the "new poor"; because, due to the restrictions of the state of emergency, poverty has increased. In other words, COVID-19 has pushed large numbers of families into poverty. "A dilemma has arisen: staying at home to prevent COVID-19 and starving, or going out on the street looking for bread, running the risk of being infected and infecting other people and even family members and friends! Weeks before the first COVID-19 cases occurred in Angola, a Cameroonian Jesuit priest said in an article that what would kill Africans is not the new coronavirus, but the hunger virus. In fact, when we walk in the neighborhoods of Luanda and its surroundings, we realize the precariousness and if we do not globalize solidarity and if the executive does not provide food, we will have more deaths from hunger than from coronavirus".
But good can arise from an evil if man lets himself be guided by an enlightened conscience. Fr. Epalanga concludes by stating: "The truth is that the new coronavirus has refined our imagination and forced us to adopt new ways of relating. It has taught us to be more humble and to rethink our public health systems, to improve the social protection system, to be disciplined, to obey rules and authorities, to form a collective conscience, to give greater importance to community life and family life". (L.M.) (Agenzia Fides, 5/6/2020)

AMERICA/BRAZIL - Church solidarity campaign for the pandemic: aid for 540,000 people