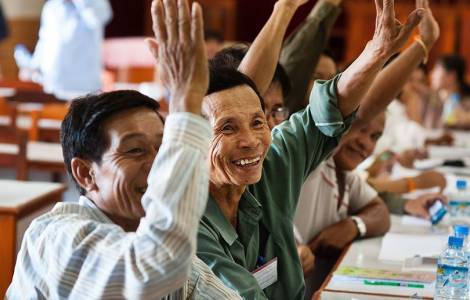 Vientiane (Agenzia Fides) - In the small and isolated Laos, a country with seven million inhabitants in the northern heart of Southeast Asia and with a socialist type government, with a single party in power, coronavirus numbers are so low as to arouse amazement: on May 27 only 19 people Covid-19 cases were registered and zero reported deaths. Meanwhile, two of the five patients with Covid-19 at the Mittaphab hospital in Vientiane were negative to the test and, if negative for the second time, they will be able to return home. The "primacy" of Laos, shared in Asia only with East Timor, Turkmenistan, Cambodia and Vietnam is being observed despite the geographical proximity to China and the huge coming and going of Chinese labor in Laos: thousands of Chinese workers are busy building the high-speed rail linking the South of the People's Republic to Singapore. The journey, which takes days today, can be carried out in a few hours within a few years.
Although Laos reacted promptly and effectively by isolating the virus before it could affect the fragile national health system, its effects will still be felt in the socio-economic field: according to the World Bank's six-monthly-annual report, in fact, the economic growth in 2020 is expected will decrease by at least 1% or 1.8% in the worst case scenario, and the pandemic will increase the fiscal deficit, with an increase in debt. The shock will also have consequences on the labor market and poverty given the sharp drop in the tourism sector which represents 11% of total employment and 22% in urban areas.
Laos has achieved a number of ambitious development goals thanks to the market liberalization reform plan (the "Chintanakhan Mai") introduced in 1986. Poverty levels have halved from 46.0% in 1993 to 23.3%. 2013 and GDP growth has averaged 7.8% over the past decade, with marked improvements in education and health. In 2018 the results of this growth, mainly driven by natural resources, energy sectors and tourism, allowed Laos to move from a low-income to a medium-low country. In 2024 the nation may be formally removed from the list of "least developed" countries. However, it remains a country with profound difficulties in isolated geographical areas and in areas that are still in the grip of poverty, unemployment and social exclusion. The socially most vulnerable segments, such as the elderly, women and children, pay for belonging to poor families in remote rural areas which is particularly true for families of Vietnamese origin or belonging to mountain tribes, ethnic differences that have created problems with the majority of Lao ethnicity. (MG-PA) (Agenzia Fides, 28/5/2020)

AMERICA/URUGUAY - After the interruption due to the pandemic, thousands of pilgrims return to the Shrine of the "Our Lady of the Thirty-Three"

ASIA/PHILIPPINES - Preserving the beauty and the population of Boracay: "No" to the spread of gambling