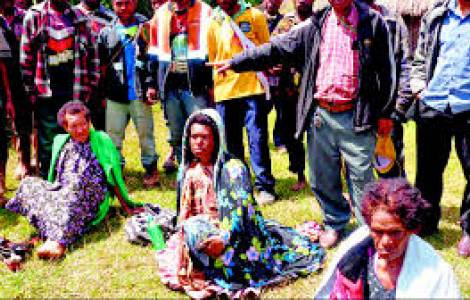 2022-06-10
Appointment of the Rector of the "Good Shepherd" Philosophical Seminary in Banz, Archdiocese of Mount Hagen

2021-12-14
"Spirituality of communication": online program promoted by the Salesians of Don Bosco

2021-10-09
Priority to the missionary formation of children

Bereina (Agenzia Fides) - "The police rescued two women while a crowd of five hundred people watched them being tortured, stabbed and burned with iron bars. A few weeks ago this news was on the front page of the national newspaper, in Papua New Guinea. How can it be that torture occurs under the eyes of so many people? What happened was an episode of violence, related to an accusation of witchcraft. But even sadder is having to talk about murders on witchcraft charges". Sister Anna Pigozzo, missionary of the Cavanis Fraternity of Jesus Good Shepherd in Bereina, spoke to Agenzia Fides.
"While the Coronavirus pandemic is reaping many victims, these reports remind us that there are people in the world who still suffer and die from terrible injustices", explains the missionary.
"Here in Papua New Guinea, in fact, believing in magic and superstition is still deeply rooted: if, for example, a person dies suddenly and without any visible disease, people tend to think that death was caused by a curse caused by an 'enemy'. For this reason, they try to identify the 'enemy' to punish him and avenge death. It is considered a form of justice and, until 2013, the law also took this cultural trait into consideration, easing the punishment of a murder sentence if there had been an alleged accusation of magic against the victim. In 2013 the law was modified and in 2015 the government approved the Sorcery National Action Plan, the implementation of which is still evidently long and difficult. In fact, Papua New Guinea, both in rural areas and in cities, has experienced an increase in violent attacks by large groups who, accusing the victims of witchcraft, want to do themselves justice. Eyewitnesses of the murder of a victim accused of witchcraft will not report the crime, for fear of losing their lives or that of their family members".
"Everyone talks about the importance of the development of Papua New Guinea, but focusing only on the economic aspect. Without moral growth, this country will not be able to progress. Today is the time to remove this great shame from our community, from our country, from our faith. Sister Anna underlines the fact that "violence and hatred cannot be fought with further violence and hatred and that, reflecting on these issues, we are even more convinced of how important it is to continue the work of evangelization and education in this country, where Christian faith arrived one hundred and thirty years ago. " The missionary also recalls: "Already in 2012 people were told that one cannot be Catholic and believe in sanguma (magic), in potions, in witchcraft. Failure to report torture or murder of victims accused of witchcraft means believing in witchcraft. All this is incompatible with the Catholic faith".
"In this cultural battle - she concludes - we have education as tools, to develop critical thinking and a sense of responsibility, to learn to distinguish facts from opinions. We have prayer, the sacraments, our Catholic faith in which we profess to believe in God, Father, Almighty, to help ward off violence, superstition, hatred and any other sin. We cannot be silent witnesses of violence, abuse and crime. Every time and in any way, let us strive to share the charity and peace of Christ". (AP/AP) (Agenzia Fides, 18/5/2020)