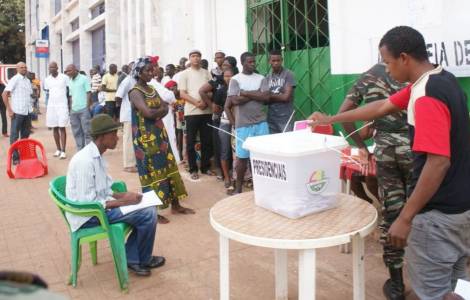 2020-07-18
"Still too many infections" due to Covid-19, the Bishops postpone the opening of churches for worship

2020-03-03
One country, two presidents: instability and tensions are feared

Bissau (Agenzia Fides) - The crisis in Guinea-Bissau is likely to get worse. Umaro Cissoko Embalò's surprise move, who emerged victorious from the December 29 ballot, to proclaim himself president without waiting for the outcome of the Supreme Court's investigation of possible fraud, provoked inevitable tensions and led the army - sided with the former general - to take control of the various national ministries, TV and Radio.
After the end of the 2019 elections, which saw Domingos Pereira and Embalò contend for the presidency, the country entered a condition of total impasse. Embalò, a former officer likely supported by neighboring Senegal, in fact, had emerged victorious, obtaining 53.55% of the votes against Pereira's 46.45%. The latter, however, had immediately contested the result. In an alternation of tensions and mutual accusations, the situation precipitated on 29 February. On that day, in fact, the country found itself in the anomalous situation of having two presidents: Embaló, who stayed in a hotel in the capital and Cipriano Cassama, appointed interim president by the deputies in parliament. Embalò's moves to announce Cassama's total illegitimacy and to appoint Nuno Gomes Nabiam as prime minister in place of Aristides Gomes, sparked the reactions of oppositions that speak of a 'coup d'état'.
The hopes that the elections could put an end to chronic instability in Guinea-Bissau, therefore, seem to be proven wrong. In a conversation with Agenzia Fides, a picture of the situation is outlined by Father Celso Corbioli, of the Oblate Missionaries of Mary Immaculate: "The situation is very confusing. The Supreme Court had not yet concluded the assessment process regarding the appeals on the vote of 29 December and Embalò, surprising everyone, decided to proclaim himself president. In the meantime, the military, derogating from the principle of neutrality, immediately took sides with Embalò, making, according to many, a serious mistake. When Parliament appointed Cassama interim president, tension immediately grew. The next day the military showed up in front of his house and, as he said, forced him to resign with threats". Exhausted Prime Minister Aristides Gomes also said he was threatened by the military. The missionary continues: "At the moment the situation in Bissau seems calm. On Sunday I went to celebrate mass in a parish on the other side of the city and luckily I had no problems", but the tension lurks underneath and could explode. The hope, says Fr. Corbioli, "is to find an agreement, return to dialogue and accept that the Supreme Court does its job. If, in the end, Embalò is declared the winner, this result can be accepted, as long as there is clarity. Visits by UN and CEDEAO (Economic Community of West African States) representatives are expected shortly. We hope they help the country to get out of this impasse". (LA) (Agenzia Fides 3/3/2020)